Timebomb of Public Health Challenges Need To Be Tackled By Superheroes 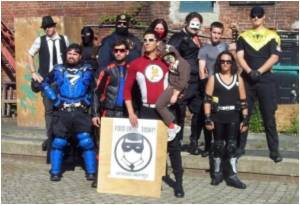 According to new research, public health 'superheroes' are needed to help tackle the growing challenges posed by obesity, alcohol, smoking and other public health threats.

The research, an international collaboration from the Universities of Leeds, Alberta and Wisconsin, calls for government and policy makers to recognise the role that public health leaders can play in addressing these significant health challenges.

Non-communicable diseases are the diseases that are non-transferrable and non-infectious among people. They may be chronic disease of prolonged duration or slow in progression.
Advertisement

It suggests that potential public health 'superheroes' can come from both within public health disciplines, and perhaps more importantly, from outside the profession.However, the research also questions the ability of current public health professionals to lead and influence policy. Instead, it voices concerns about the "corporatisation" of public health in compromising leaders' abilities to speak out as independent advocates for the health of the public.


The results are published today in the medical journal, Lancet.

One of the lead authors of the research, Professor Darren Shickle, head of the Academic Unit of Public Health at the University of Leeds, said: "Public health as a specialty has been stifled by re-organisation and it is critical that both current and new professionals have help in becoming more effective leaders. You only have to look at the role that Jamie Oliver has played as someone who has the ability to engage, inspire and make a difference. But we need to act now to ensure public health leaders at all levels have the skills, resilience and influence to address the public health challenges of today and the future."

Neurobiological and Psychosocial Disorders Due to Depression in Older Persons: The Netherland Study

Late life depression is a serious problem amongst elderly. Depression, stress, loneliness could lead to the development of conditions like cardiovascular disease, diabetes and physical impairment.
Advertisement
World Health Organisation data reveals the extent of the challenge, indicating that that worldwide obesity has more than doubled since 1980 and that the harmful use of alcohol results in 2.5 million deaths each year. Tobacco kills nearly 6 million people each year and according to the Department of Health, smoking accounts for over 100,000 deaths every year in the UK alone.

Professor Tom Oliver, from the University of Wisconsin, added: "We must ensure that leaders across many sectors of society understand the causes and consequences of these major threats to health and well-being. More importantly, we must develop leaders who can translate that understanding into political support for evidence-based responses to those threats. The most effective leaders combine systematic analysis of problems and potential solutions, and have an ability to recruit partners and champions for new policies and practices."

Across the UK, local governments are preparing to take on a wider remit for public health from April 2013, with new duties to improve the health of their communities. Professor Shickle believes this transference of public health functions to local authorities presents significant challenges but there are also opportunities for both developing current leaders and recruiting new 'superheroes'.

He said: "The new public health system is moving forwards rapidly now, opening up doors to a growing number of effective leaders who can occupy key positions and intervene at all levels to bring about radical changes in social attitudes and behaviour. Challenges posed by obesity and alcohol alone represent a ticking timebomb, with huge implications for health budgets, but effective public health leaders can play a central role in driving this change."

Pregnant Women May Get Psychological Benefit from Water Aerobics

Water aerobics has significant benefits in pregnant woman however, it did not affect the quality of life (QOL) of the participants reports a study from Brazil.
Advertisement
<< Working 2 Jobs Are Clot-busting Enzymes
'Not So Simple': Concussion Spectrum in College Athletes We... >>

Scanning for Good Health - A Lifelong Quest to Serve the Society