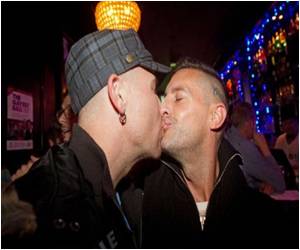 After a decades-long campaign, New Zealand became the first Asia-Pacific country to legalise same-sex marriage, a historic decision celebrated with parties across the gay community.

A parliamentary vote overwhelmingly backed a move to amend the 1955 Marriage Act 77-44 to describe matrimony as a union of two people regardless of their sex, sexuality or how they choose to identify their gender.


"It is about saying these lives matter, our society is big enough for us," gay Green Party MP Kevin Hague told parliament.


The lawmaker behind the reform, Louisa Wall, a gay member of the centre-left Labour Party, said the New Zealand legislation should pave the way for reform in other countries in the region.

"The law unfortunately has treated homosexual New Zealanders as less than human, as less than equal citizens," she told AFP. "What this bill will do is ensure the state does not discriminate against any citizen."

Parliament's public gallery was booked out due to overwhelming demand and a big screen was erected in an overflow room near the debating chamber to accommodate hundreds of extra onlookers.

"There's going to be parties everywhere," LegaliseLove Wellington co-ordinator Joseph Habgood said ahead of the vote.

Australia rejected a similar proposal last September and the issue has prompted heated debate in the United States since President Barack Obama made support for same-sex unions a prominent part of his second-term agenda.

With Britain and France both appearing set to adopt same-sex marriage soon, Wall said a "global conversation" on gay rights was occurring, which should prompt changes in nations such as Tonga and Samoa, where homosexuality is still illegal.

Opinion was divided on Cuba Street ahead of the vote.

But Suzy Prime was "totally opposed" to the change, raising concerns about the impact on children raised in same-sex marriages.

"I don't think there's a need for marriage," she said. "We already have a law that they can be together with their civil rights. I don't have a problem with that but I don't think it's right to go beyond that and allow marriage."

New Zealand decriminalised homosexuality in 1986 and since 2005 has allowed same-sex civil unions.

Homophobic Assaults on a Rise Over the Gay Marriage Debate
The victim of a brutal attack in Paris-Wilfred de Bruijin suffers a bruised eye and a broken tooth, ...

Gay Marriage Soon To Be Legalized In New Zealand
Gay rights advocates said that the parliamentary vote will represent a milestone in the struggle ......

French Senate Adopts Gay Marriage Law
A landmark bill granting homosexual couples the right to marry and adopt has been approved by ......