Gay Marriage Soon To Be Legalized In New Zealand 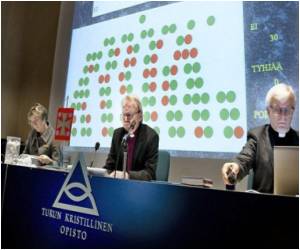 Gay rights advocates said that the parliamentary vote will represent a milestone in the struggle for equality as New Zealand is poised to legalise same-sex marriage.

A bill that amends the 1955 Marriage Act to describe marriage as "a union of two people regardless of their sex, sexual orientation or gender identity" will have its third and final reading in parliament on Wednesday.

The proposal is set to pass comfortably after receiving widespread support during two previous debates -- including backing from Prime Minister John Key -- with the most recent vote last month running at 77 votes for and 43 against.


LegaliseLove Wellington co-ordinator Joseph Habgood said gay venues in the capital's nightclub strip planned to screen the vote live and host parties marking the occasion.
Advertisement
"This will make a huge difference," he told AFP. "Not only for couples who want to get married but also for young people who are struggling with their sexuality."

"This is parliament sending a message saying 'you matter, you are equal'."

The lawmaker behind the reform is Louisa Wall, an openly gay member of the centre-left Labour Party who argues the institution of marriage needs to be updated to be more inclusive.

"For me, if two people love each other and marry and commit to each other for the rest of their lives, it should be something we all celebrate," she said after submitting the bill last year.

However, there has been opposition to the move, including from the conservative Family First group, which accuses politicians of undermining traditional male-female marriage under pressure from the gay lobby.

"The definition of marriage should stay as traditionally and commonly conceived, not one manipulated by politics and political correctness," Family First co-ordinator Bob McCoskrie said.