New Ways to Deliver Drugs Through the Skin Revealed 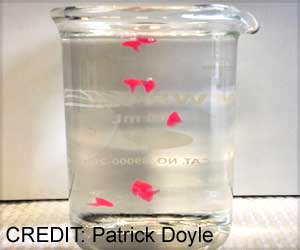 Nanoemulsion gels with FDA-approved components were found to deliver large payloads of active ingredients, said MIT chemical engineers. Such emulsions are similar to the mixture that forms when you shake an oil-and-vinegar salad dressing, but with much smaller droplets. Their tiny size allows them to remain stable for relatively long periods of time.

The researchers also found a way to easily convert the liquid nanoemulsions to a gel when they reach body temperature (37 degrees Celsius), which could be useful for developing materials that can deliver medication when rubbed on the skin or injected into the body.

Melanoma of the skin is a dangerous type of skin cancer that usually appears as a cancerous mole due to exposure to the sun's damaging UV rays.
Advertisement
‘Nanoemulsions, which contain droplets with a diameter 200 nanometers or smaller, are desirable not only because they are more stable, but they also have a higher ratio of surface area to volume, which allows them to carry larger payloads of active ingredients such as drugs or sunscreens.’
Tweet it Now

"The pharmaceutical industry is hugely interested in nanoemulsions as a way of delivering small molecule therapeutics. That could be topically, through ingestion, or by spraying into the nose, because once you start getting into the size range of hundreds of nanometers you can permeate much more effectively into the skin," says Patrick Doyle, the Robert T. Haslam Professor of Chemical Engineering and the senior author of the study.


In their new study, which appears in the June 21 issue of Nature Communications, the researchers created nanoemulsions that were stable for more than a year. To demonstrate the emulsions' potential usefulness for delivering drugs, the researchers showed that they could incorporate ibuprofen into the droplets.

One of the easiest ways to create an emulsion is to add energy -- by shaking your salad dressing, for example, or using a homogenizer to break down fat globules in milk. The more energy that goes in, the smaller the droplets, and the more stable they are.

Over the past few years, Doyle's lab has been working on lower-energy strategies for making nanoemulsions, which could make the process easier to adapt for large-scale industrial manufacturing.

Detergent-like chemicals called surfactants can speed up the formation of emulsions, but many of the surfactants that have previously been used for creating nanoemulsions are not FDA-approved for use in humans. Doyle and his students chose two surfactants that are uncharged, which makes them less likely to irritate the skin, and are already FDA-approved as food or cosmetic additives. They also added a small amount of polyethylene glycol (PEG), a biocompatible polymer used for drug delivery that helps the solution to form even smaller droplets, down to about 50 nanometers in diameter.

"With this approach, you don't have to put in much energy at all," Doyle says. "In fact, a slow stirring bar almost spontaneously creates these super small emulsions." Active ingredients can be mixed into the oil phase before the emulsion is formed, so they end up loaded into the droplets of the emulsion.

Once they had developed a low-energy way to create nanoemulsions, using nontoxic ingredients, the researchers added a step that would allow the emulsions to be easily converted to gels when they reach body temperature. They achieved this by incorporating heat-sensitive polymers called poloxamers, or Pluronics, which are already FDA-approved and used in some drugs and cosmetics.

Pluronics contain three "blocks" of polymers: The outer two regions are hydrophilic, while the middle region is slightly hydrophobic. At room temperature, these molecules dissolve in water but do not interact much with the droplets that form the emulsion. However, when heated, the hydrophobic regions attach to the droplets, forcing them to pack together more tightly and creating a jelly-like solid. This process happens within seconds of heating the emulsion to the necessary temperature.

The researchers found that they could tune the properties of the gels, including the temperature at which the material becomes a gel, by changing the size of the emulsion droplets and the concentration and structure of the Pluronics that they added to the emulsion. They can also alter traits such as elasticity and yield stress, which is a measure of how much force is needed to spread the gel.

Doyle is now exploring ways to incorporate a variety of active pharmaceutical ingredients into this type of gel. Such products could be useful for delivering topical medications to help heal burns or other types of injuries, or could be injected to form a "drug depot" that would solidify inside the body and release drugs over an extended period of time. These droplets could also be made small enough that they could be used in nasal sprays for delivering inhalable drugs, Doyle says.

For cosmetic applications, this approach could be used to create moisturizers or other products that are more shelf-stable and feel smoother on the skin.