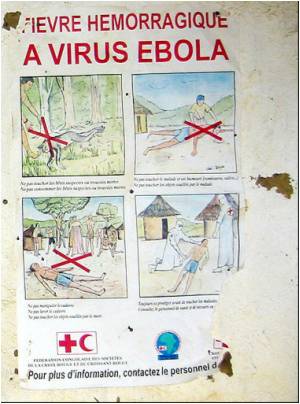 Hemorrhagic fever outbreak in the Democratic Republic of Congo may be caused by a novel virus, say researchers. Described this week in the open-access journal PLoS Pathogens, the new microbe has been named Bas-Congo virus (BASV) after the province in the southwest corner of the Congo where the three people lived.

It was discovered by an international research consortium that included the University of California, San Francisco (UCSF) and University of California, Davis (UCD), Global Viral, the Centre International de Recherches Médicales de Franceville in Gabon, the Institut National de Recherche Biomédicale, Kinshasa in the Democratic Republic of the Congo, Metabiota and others.

"Known viruses, such as Ebola, HIV and influenza, represent just the tip of the microbial iceberg," said Joseph Fair, PhD, a co-author and vice president of Metabiota. "Identifying deadly unknown viruses, such as Bas-Congo virus, gives us a leg up in controlling future outbreaks."


"These are the only three cases known to have occurred, although there could be additional outbreaks from this virus in the future," said Charles Chiu, MD, PhD, an assistant professor of laboratory medicine at UCSF and director of the UCSF-Abbott Viral Diagnostics and Discovery Center, who spearheaded the UCSF effort to identify the virus. Chiu and his team continue to work on new diagnostics to detect the virus so that health officials in Congo and elsewhere can quickly identify it should it emerge again.

Health teams collected blood samples of 250 cattle to detect the presence of the deadly CCHF virus, from Kolat village in Sanand and surrounding areas.
Advertisement
One odd characteristic of the Bas-Congo virus, Chiu said, is that while a number of other viruses in Africa also cause deadly outbreaks of acute hemorrhagic feverEbola virus, Lassa virus and Crimean-Congo Hemorrhagic Fever virus to name a few the new virus is unlike any of them.

Genetically it is more closely related to the types of viruses that cause rabies, which are known to infect people with a very different sort of diseasea neurological illness that is uniformly fatal if untreated but may take months to develop.

An antibody test developed in this study was applied to the one patient who survived and to others who had come into contact with him. It suggested that the disease may be spread from person to person but likely originated from some other source, such as an insect or rodent.

According to health authorities, the number of West Nile virus deaths and infections continued to rise in the United States last week, but at a slower pace.
Advertisement
<< Method to Make Old Muscles Young Again
Chewing Paan With Tobacco can Cause Cancer >>

Post-Nasal Drip Drug - Food Interactions Find a Doctor Drug Side Effects Calculator Diaphragmatic Hernia Indian Medical Journals Accident and Trauma Care The Essence of Yoga Loram (2 mg) (Lorazepam) A-Z Drug Brands in India
This site uses cookies to deliver our services. By using our site, you acknowledge that you have read and understand our Cookie Policy, Privacy Policy, and our Terms of Use