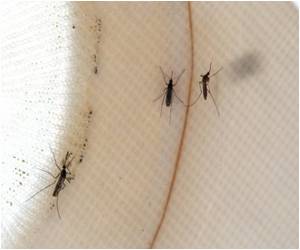 According to health authorities, the number of West Nile virus deaths and infections continued to rise in the United States last week, but at a slower pace.

As of Tuesday, 3,545 cases of the mosquito-borne disease were reported this year, including 147 fatalities, the Centers for Disease Control and Prevention (CDC) said.

At least three people have succumbed to mosquito-borne West Nile Virus in Serbia, according to reports.
Advertisement

This compares to 3,142 reported the previous week, a 13 percent increase compared to a 30 percent rise earlier in September.


It is "the highest number of West Nile virus disease cases reported ... through the last week in September since 2003," the CDC said.

The bulk of the cases -- 70 percent -- were reported in eight states: Texas, Mississippi, South Dakota, Michigan, California, Louisiana, Oklahoma, and Illinois. Thirty-eight percent of all cases were reported in Texas.

The United States has seen at least 1,118 cases of West Nile virus this year, the most since the mosquito-borne disease was first detected in 1999, with 41 deaths, authorities said Wednesday.
Advertisement
The 147 deaths during the week ended September 25 marked an increase of 9.7 percent compared to 134 deaths the previous week.

Since the West Nile virus was first observed in the United States in 1999, more than 30,000 people have been infected with the virus, which can cause life altering disease.

This year, the soaring number could be due to a relatively mild winter, an early spring and a hot summer.

Other factors potentially contributing to the outbreak are birds transporting the virus and an exploding mosquito population.

First identified in Uganda in 1937, the virus manifests itself in a number of different ways and 80 percent of the time does not spark serious symptoms.

However, it can also cause potentially fatal complications such as meningitis or encephalitis.

About one in 150 people infected will develop severe illness with symptoms that include high fever, convulsions, vision loss, numbness, coma and can cause permanent paralysis and neurological damage.

Eighty percent of those infected will not show any symptoms at all and milder symptoms range from headaches to skin rashes, the CDC said.

The US state of Texas is battling an outbreak of the West Nile virus, the mosquito-borne disease that killed at least 16 people and continues to sicken hundreds, authorities said.
Advertisement
<< Automatic Toilet-cum-washlets Showcased in Japan
Ex England Cricketer Who's Battling Leukaemia Saved by Mist... >>

Five people have died and over 100 have been infected in an outbreak of the West Nile virus in Volgograd, central Russia, where two million people are at risk of catching the mosquito-borne
Advertisement
News A-Z
A B C D E F G H I J K L M N O P Q R S T U V W X Y Z
What's New on Medindia

Zika Fever
News Archive
News Resource
Advertisement
News Category
Death Caused by a Rare Type Amoeba: Research Study Japan Approves Smallpox Vaccine for Monkeypox Did Human Evolution Shrink Your Brain? What to Do When Your Asthma Medication Doesn't Work? Which is Better to Improve Smoker's Health  Cigarettes or E-Cigarettes?
More News
Sign up for Wellness Consult a Doctor Sign up for Selfcare

Drug Interaction Checker Calculate Ideal Weight for Infants Find a Hospital Post-Nasal Drip Selfie Addiction Calculator Blood - Sugar Chart The Essence of Yoga Indian Medical Journals A-Z Drug Brands in India Daily Calorie Requirements
This site uses cookies to deliver our services. By using our site, you acknowledge that you have read and understand our Cookie Policy, Privacy Policy, and our Terms of Use