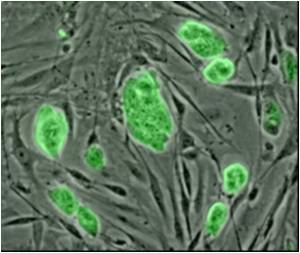 A gene-mutation "Fritz" could be responsible for genetic disorders, biologist John Wallingford and human geneticist and cell biologist Nicholas Katsanis have found.

Their results are published online in this week's edition of Science.

Bardet-Biedl syndrome, and its related Meckel-Gruber syndrome, are two rare but well-studied disorders that result in conditions such as mental retardation, obesity, blindness and kidney failure. This is the first study implicating Fritz's role in human disorders, and the first study of the gene in vertebrates.


Wallingford found that the gene plays a role in two processes in developing embryosfirst, the collective movement of cells as they mold the shape of developing embryos, and second, the creation of cilia, which are projections from cells that serve as sensory antennae.

Wallingford and his team were pointed toward the role of Fritz in controlling septins by watching time-lapse videos of developing frog embryos with and without the gene.

"Normally, movement of the cell membrane is smooth in developing embryos," said Wallingford, associate professor of biology, "but those embryos without Fritz had cell membranes that were waving and jostling around. Septins basically make a coat across the plasma membrane and stabilize it. Because the membranes looked floppy, the septins are one of the things we looked at."

Lack of the Fritz gene manifested in several ways in the developing embryo. In early stages, embryos had problems associated with collective cell movement and growing longer. That resulted in a number of morphological problems such as defects in the neural tube.

Later stage embryos showed cranio-facial malformations similar to those seen in Meckel-Gruber patients. Those deformities were likely caused by malfunctions in cilia.

"This suggests that septins are being deployed in different ways in these different cell types," said Wallingford.

Armed with the information from the Wallingford lab, Katsanis and his group then discovered that patients with Bardet-Biedl and Meckel-Gruber syndromes have mutations in the Fritz gene.

"This result obviously furthers our understanding of these syndromes," said Katsanis. "Perhaps more important, however, we now have both hard evidence for previous suspicions and a brand new set of mechanistic underpinning for ciliary dysfunction in people".

Ultimately, these findings shed light on the mechanisms by which fundamental cellular machinery is regulated during embryonic development and is related to human disease.

"This is a good example of studying basic cellular biology that leads to insights in human diseases," said Wallingford. "If we just think about the way basic biology links in with humans, there's the ability to make that leap. We will discover things about human diseases even when we are trying to study frog development."

Katsanis concurs: "This work is such an elegant example of the progress that can be achieved, and quickly, when scientific disciplines intermesh."

Computer software is being used by scientists to predict what form a dangerous strain of bacteria might mutate into, much like a chess player would predict about his opponent's strategies.
Advertisement
Advertisement

Alagille syndrome is a rare genetic disorder that is caused by hereditary or spontaneous mutations in JAG1 or ...

Farber disease is a genetic disease characterised by the deficiency of ceramidase. It has no specific ...

Galactosemia is one of many genetically inherited diseases and it affects ones ability to process galactose. ...

Pompe disease or Glycogen Storage Disease is a rare genetic disease caused by the buildup of a sugar called ...