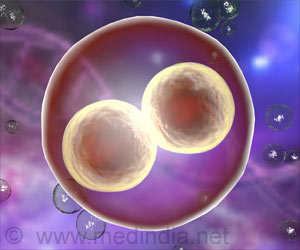 A protein, known as CD34, used to identify blood-forming cells is much more than a mere surface marker. This protein also plays a key role in binding adhesion molecules in the bone marrow, shows a KAUST study.

The discovery that this binding aids in the proper engraftment of blood-forming stem and progenitor cells following their transplantation is a result that opens the door to "improving the migration of these cells for therapeutic endeavors," says Jasmeen Merzaban, the biochemist who led the team.

Stem cell transplants are used to treat patients with a variety of life-threatening blood disorders. These stem cells, when derived from an adult (as opposed to from cord blood), are isolated by giving the donor a drug that causes stem cells in the bone marrow to mobilize and enter the bloodstream. The blood is then run through a device that extracts all the cells expressing CD34.


These CD34-positive cells can give rise to all the various types of blood components--but they're not the only ones with this ability. Some cells that don't express this surface marker can do the same; however, CD34-negative cells in circulation aren't as good at finding their way to the bone marrow. Thus, doctors have tended to focus on CD34 selection as an easy and effective means of enriching for high-potential blood stem and progenitor cells despite the longstanding mystery of the normal biological function of CD34.
Advertisement
Merzaban and her colleagues revealed one of the functions of this protein by first testing different populations of blood-forming cells for their ability to bind adhesion molecules. They showed that only those cells expressing CD34 could do so, and an unbiased protein screen revealed that CD34 itself was responsible for this binding. Knocking down the protein confirmed CD34's essential role in cell migration.

According to the study's first author, Dina AbuSamra, a former doctoral student in Merzaban's lab now at Harvard Medical School, the results have therapeutic implications beyond simply understanding transplantation. As she points out, the CD34 protein that's found on the surface of leukemic stem cells is different from the one on healthy blood-forming stem cells. There is potential to exploit this difference "to identify leukemic stem cells and, in theory, target them using various approaches," AbuSamra says.

Merzaban also suggests that CD34-negative blood-forming stem cells--a population currently overlooked in transplantation medicine--could be manipulated in ways that boost their binding abilities. Adding these cells to the CD34-positive population might collectively augment overall efficiencies of the procedure, leading to long-term success following transplants. "This is currently a major focus of our lab," Merzaban says.

Restoring The Sense Of Touch Using Stem Cells in Patients With Paralysis
Two types of sensory cells can be produced by using a bone morphogenetic protein called BMP4, and a ...