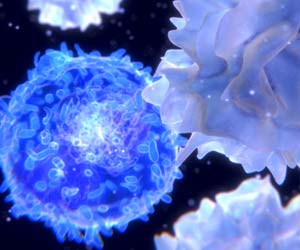 Novel immunotherapy targets and removes a sub type of immune cells named macrophages instead of attacking the cancer cells directly, offering hope to certain patients who do not respond to the current forms of immunotherapy.

This is shown by a new study published in the Journal of Experimental Medicine in which researchers from Aarhus University, Denmark, have collaborated with colleagues in France, the UK and USA, to show that the serious form of skin cancer 'malignant melanoma' can be defeated by using the new method. This variant of skin cancer accounts for eighty per cent of all deaths from melanomas.

Advertisement
‘Removing specific macrophages which express CD163 can make T cells and various other macrophages attack the tumour and shrink it.’
Read More..

"We've studied what happens to the tumour when it is exposed to targeted treatment that removes precisely ten per cent of the macrophages that are supporting the cancer tumour instead of fighting it," says Anders Etzerodt, PhD and assistant professor in cancer immunology at the Department of Biomedicine at Aarhus University.


He is the lead author of the study which is currently being shared diligently on Twitter by researchers in the field.

"The most important result is that the depletion of this specific type of macrophage causes the tumour to shrink, which is triggered by a subsequent mobilisation of new macrophages and, ultimately, also an activation of the so-called T cells which attack the tumour," says Anders Etzerodt.
Advertisement
The type of macrophages which the researchers have removed express a specific receptor, CD163, on the cell surface. Unlike other macrophages, these are known to have an undesirable effect in connection with cancer. Instead of recognising cancer cells as unwanted tissue, the macrophage sees the tumours as normal tissue that needs help with regeneration. It is also widely recognised that survival rates are worse if there are many macrophages, which express the CD163 receptor in the tumour.

"Our study suggests that the macrophages we're hitting function as a kind of 'peacekeeping' force that keeps the 'attackers' away," says Anders Etzerodt.

"When the peacekeeping macrophages in the tumour are removed, the attackers can instead be mobilised, after which the T cells and a number of other macrophages collaborate to attack the tumour. What's interesting is that the whole thing happens by itself as soon as we remove a tenth of the macrophages that express CD163, and that these appear to want to 'decide' which immune cells can be allowed to get into and out of the tumour," he says.

Anders Etzerodt adds that discovering that it is actually possible to target medical chemotherapy treatment so that it precisely hits the macrophages that are negative markers for survival is in itself an important finding.

Even though this is an example of a basic research breakthrough, it can easily take ten years before the new type of immunotherapy is offered as a treatment option in hospitals in Denmark.

The research group with Anders Etzerodt and research partners are currently testing whether the technique works just as well on mice with other kinds of cancer in which CD163 is a sign of low survival rates. These ongoing research projects focus on both cancer of the ovaries and cancer of the pancreas, and Anders Etzerodt does not hide the fact that there are still unanswered questions and issues that need to be dealt with:

"We don't know the long-term effects of removing macrophages, and we must also find partners to collaborate with and funding from foundations so we can conduct clinical trials on humans. But I believe we are well-prepared with strong proof-of-concept data and patent applications," says Anders Etzerodt, who has also worked on the idea in a leading French macrophage laboratory at the Centre d'Immunologie Marseille-Luminy. His stay here was made possible by a four-year postdoc fellowship from the Novo Nordisk Foundation.