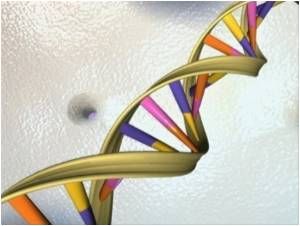 Research indicates that the genes that are responsible for maintaining each cell type form DNA loops that link control elements for these genes.

This surprising genome structure is generated and reinforced by two essential protein complexes that bridge the loops and contribute to proper gene regulation.

RELEVANCE: The DNA loop structure is essential for regulating the activity of cell-type-specific genes and thus maintaining cell state. Deficiencies in the protein complexes that help form and reinforce these DNA loops can cause multiple syndromes and diseases, including Opitz-Kaveggia syndrome, Lujan syndrome, schizophrenia, and Cornelia de Lange syndrome.


CAMBRIDGE, Mass. (August 18, 2010) - A team of researchers from Whitehead Institute, MIT, University of Colorado, and University of Massachusetts have discovered that each cell type in our bodies has a unique genome structure, which is due to a newly discovered mechanism that controls our genes. The protein complexes that generate this genome structure play a pivotal role in regulating gene transcription and cell state, and have been implicated in multiple developmental diseases.
Advertisement
"I think we have a fundamental new insight into the underlying causes of several neurological and developmental diseases, including Opitz-Kaveggia syndrome, Lujan syndrome and Cornelia de Lange syndrome," says Whitehead Institute Member Richard Young. "And it comes with a surprising new understanding of the control of genes."

According to the Young lab's paper, published online in Nature this week, a DNA loop formed at the beginning of cell-type-specific genes enables activation of these genes. Each cell type, such as skin cells, nerve cells, or embryonic stem cells, has its own gene expression program to maintain its cell state. For gene activation, regulatory factors and gene expression machinery, bound to two different parts of the DNA called the promoter and the enhancer, must come in contact. This contact, which is facilitated and maintained by protein complexes called Mediator and Cohesin, forms a set of DNA loops that is specific to each cell type.

"That's such a surprise," says Young, whose lab is deciphering the overall cellular circuitry required to regulate gene expression and cell state. "We thought that a loop of DNA probably formed at the beginning of some genesit's an old modelbut we didn't expect that loops are formed by these complexes at active cell-type-specific genes."

Finding this DNA loop structure in the genome was not the original goal for Michael Kagey, Jamie Newman, and Steve Bilodeau, who are postdoctoral researchers in the Young lab and co-first authors of the Nature paper. While looking for the genes required for embryonic stem cells to maintain their cell state, the trio found that Mediator and Cohesin were located uniquely at active, cell-type-specific genes. Mediator was already known to play some role in gene activation and Cohesin was known to hold chromosomes together. "We had no idea," says Newman, "that Mediator and Cohesin form a novel complex that generates stable DNA loops at active cell-type specific genes."

"If you lose Mediator or Cohesin function in embryonic stem cells, you can't maintain proper cell state and inappropriate differentiation occurs" says Bilodeau. "We think this is the underlying problem in patients with Mediator or Cohesin mutationsyou have a broad spectrum of developmental defects."

Cornelia de Lange patients, many of whom have defects in the Cohesin apparatus, have broad developmental defects, including severe intellectual disability, skeletal abnormalities, small stature, and gastrointestinal dysfunction. Patients with mutations in the Mediator apparatus have various neurological deficiencies.

"We hope these new insights into the control of cell-type-specific gene regulation will facilitate development of new therapeutics for patients with Mediator and Cohesin mutations," says Bilodeau.