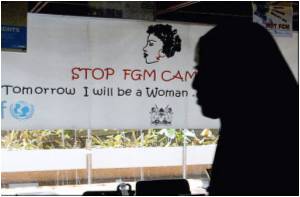 An Egyptian doctor has been arrested after she performed a botched circumcision that killed a young girl, a newspaper reported on Friday.

The independent daily Shorouk reported that police were alerted to the death of the girl, whose body was illegally buried to hide the crime, after a call to a help line the government set up to monitor female circumcision.

Female Circumcision: Men Can Stop It!

A day before the International Day against Female Genital Mutilation, experts and workers on the ground said Friday that men had a key role to play in the fight against female circumcision in Africa.

The doctor, from the Nile Delta governate of Menufiya, has been referred to a criminal court, the paper reported.


The sometimes deadly practice of female circumcision was banned in Egypt in 2007, but is believed still to be common.

A 2005 government report found that more than 95 percent of Egyptian women had undergone the extremely painful procedure which can severely mutilate the genitals.

A two-day conference has been convened by lawmakers from 27 African countries in Dakar to push for a UN ban on female genital mutilation as a breach of human rights.

The practice is illegal in the U.S., reports The New York Daily News.

Phimosis or tight foreskin is the inability to fully retract the foreskin over the glans penis due to a ...

The term ''Phimosis'' derived from the Greek word for ''muzzling'' has been widely applied to narrow ...