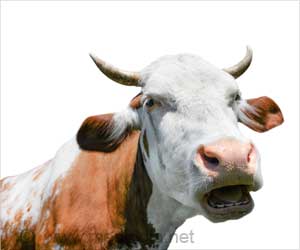 Drug combination containing immune checkpoint inhibitor and an enzyme inhibitor found to reduce the levels of BLV in cows with severe infections. This finding can be used to control other diseases in cattle.

A total of 3,859 cases of bovine leukemia were reported among cattle in Japan in 2018, a 38-fold increase over 1998, posing a serious economic threat to cattle farmers.


In previous studies, the team led by Satoru Konnai of Hokkaido University demonstrated that the progression of bovine leukemia is closely related to immune suppression induced by immune checkpoint proteins such as PD-L1, and that an anti-PD-L1 antibody could effectively treat BLV-infected cows. However, the antibody alone was not effective in advanced cases with high BLV counts. Therefore, the researchers focused on prostaglandin E2 (PGE2), a bioactive substance which they discovered acted as an immune suppressor by upregulating PD-L1 in cows with a chronic bacterial disease called Johne's disease.


In the present study published in The Journal of Immunology, the team first showed that blood PGE2 levels increased in BLV-infected cows as the disease progressed. They also found that a COX-2 inhibitor, which blocks the production of PGE2, activated immune response against BLV in cultured immune cells, and that combining this with the anti-PD-L1 antibody boosted the immune activation effect.
Advertisement
Most importantly, cows administered the COX-2 inhibitor showed reduced viral loads, demonstrating its antiviral effect in the animals themselves. Administering both drugs, the COX-2 inhibitor and anti-PD-L1 antibody in combination, led to reduced viral loads in advanced stage cows.

"Our study showed that the drug combination has an antiviral effect in BLV-infected animals with high viral levels, which are a major source of infection on farms," says Satoru Konnai of Hokkaido University. The researchers plan to conduct a larger verification experiment on BLV-infected cows and also study whether the drugs have any antibacterial and antiviral effects on other bovine diseases.