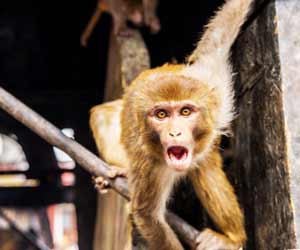 Team of researchers led by Spanish scientist Juan Carlos Izpisúa created a human-monkey hybrid for the first time in a laboratory in China. If this experiment is successful, it may be the answer to organ transplantation problems.

The team of researchers, genetically modified monkey embryos to suppress genes that are essential in the formation of organs. The scientists then injected human stem cells into the monkey embryo, and this leads to the creation of a monkey with human cells, which was not born because researchers terminated the gestation. The experiment took place in China to avoid legal issues.
Advertisement
‘The ultimate goal of this experiment is to achieve a successful and fruitful alternative for human organ transplantation.’
Read More..

"The results are very promising," says Núñez, a biologist and vice-chancellor of research at UCAM. The team provided minimum details because they are waiting to explain in detail in an internationally renowned scientific journal. "From UCAM and the Salk Institute we are now trying not only to move forward and continue experimenting with human cells and rodent and pig cells but also with non-human primates," explains Izpisúa. "Our country is a pioneer and a world leader in these investigations," he adds.


Mr.Izpisúa was born in Hellín (Albacete) in 1960, according to him his team conducted in 2017 "the first experiment of human and pig chimeras in the world," although it was not successful.
Advertisement
"The human cells did not take hold. We saw that they contributed very little [to the development of the embryo]: one human cell forever 100,000 pig cells," says the Argentinean veterinarian Pablo Ross, a researcher from the University of California at Davis and a co-author of that experiment.

The team has created chimeras between more similar species, for example, the rat and the mouse, and they are five times more similar compared to humans and pigs. In 2017, the researchers utilized the genome-editing tool CRISPR to deactivate genes that are essential to the development of the heart, eyes, and pancreas in mouse embryos. The team then substituted the rat stem cells that were capable of generating these organs. This resulted in a series of rat-mouse chimera embryos, whose gestation was terminated because of the international consensus regarding these types of experiments.

Doctor Ángel Raya, the director of the Barcelona Regenerative Medicine Center, questions the ethics of these experiments." "What happens if the stem cells escape and form human neurons in the brain of the animal? Would it have consciousness? And what happens if these stem cells turn into sperm cells?" he asks. Núñez seems certain that Izpisuá's research team has created mechanisms "so that if human cells migrate to the brain, they will self-destruct."

To maintain the integrity of these experiments, the scientific community has traditionally set the "red line at 14 days" of gestation. This ensures that the embryo doesn't develop a human central nervous system. All chimera embryos are eradicated before that period expires. "In no case is the gestation brought to full term," adds Núñez.

A major chunk of this research with monkeys in China was financed by the UCAM and wasn't cheap. "If we combine the human/pig, human/rat, and human/monkey research, it is many hundreds of thousands of euros," says Núñez.

"The ultimate goal would be to create a human organ that could be transplanted, but the path itself is almost more interesting for today's scientists," says Núñez. "I am essentially aware that I will not see it happen [the development of human organs in animals] but to arrive at that point, it's necessary to pass through this one."

Split Liver Transplantation in Children can Save More Lives
An opportunity has been found to increase organ supply, save lives of children who need liver ......

Total Abdominal Wall Transplantation can be Very Challenging
Experts aim is to review the role of abdominal wall transplantation in achieving tension-free ......