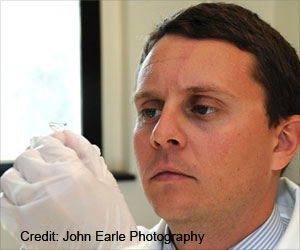 A new technology is being developed by researchers that could allow non-invasive testing of glucose levels, via a contact lens that samples glucose levels in tears.

Current method to monitor glucose levels involve a medication process along with a painful fingerpick blood test. Glucose is a good target for optical sensing, and can be used as an alternative approach, the study said.

Proper contact lens care is paramount to maintaining good eye health.
Advertisement
‘Accurate monitoring of the glucose level in human tears by employing a contact-lens-type sensor can be an alternative approach for non-invasive glucose monitoring.’
Tweet it Now

"It should be noted that glucose is present not only in the blood but also in tears, and thus accurate monitoring of the glucose level in human tears by employing a contact-lens-type sensor can be an alternative approach for non-invasive glucose monitoring," said Wei-Chuan Shih, Associate Professor at University of Houston in Texas, US.

Many discontinue contact lens use due to symptoms such as foreign body sensation, burning, itching, or dryness.
Advertisement
This component strengthens a technique called surface-enhanced Raman scattering -- named after Indian physicist C.V. Raman, who discovered the effect first in 1928 -- which gauges how light interacts with a material to determine its molecular composition, the researchers stated.

Further, the device enhances the sensing properties of the technique by creating "hot spots" or narrow gaps within the nanostructure which intensified the Raman signal.

Traditional nanofabrication techniques rely on a hard substrate -- usually glass or a silicon wafer -- but researchers wanted a flexible nanostructure which would be more suited to wearable electronics, Shih said. The layered nanoarray was produced on a hard substrate but lifted off and printed onto a soft contact, Shih said in the paper published in the journal Advanced Materials.

Although non-invasive glucose sensing is just one potential application of the technology, it provided a good way to prove the technology, he said. Moreover, the device is also an effective mechanism for using surface-enhanced Raman scattering spectroscopy.

After too many hours of wearing contact lenses, the lenses and your eyes dry out, causing irritation that might outweigh the convenience of contacts.
Advertisement

Soon, you will be able to get a pair of 'smart' contact lenses as a team of scientists is creating a stretchable nano-scale device to manipulate light.

Conjunctivitis or Pink Eye causes redness and soreness of the conjunctiva and is responsible for 1% of all ...

Redness of the eye occurs due to the dilation of the blood vessels of the eye. It can occur due to excessive ...

Keratoconus is a bilateral condition affecting both the eyes. Usually one eye is more severely affected than ...

Myopia is the inability of a person to see the distant objects clearly. Myopia is also known as near or short ...

A contact lens is an artificial lens placed on the cornea for refractive, treatment or diagnostic purposes. ...