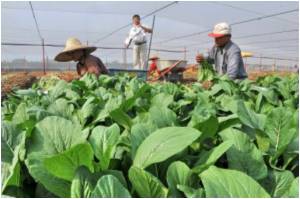 Nanotechnology is bound to work wonders in the area of pesticides and pest control, but this also calls for a range of new approaches to understand the benefits as well as risks.

In a study published today in the International Journal of Occupational and Environmental Health, scientists from Oregon State University and the European Union outline six regulatory and educational issues that should be considered whenever nanoparticles are going to be used in pesticides.

A new technology can come to the aid of scientists during clinical trials , enabling a better understanding of how drugs work.
Advertisement

"If we do it right, it should be possible to design nanoparticles with safety as a primary consideration, so they can help create pesticides that work better or are actually safer," said Stacey Harper, an assistant professor of nanotoxicology at Oregon State University. Harper is a national leader in the safety and environmental impacts of this science that deals with particles so extraordinarily small they can have novel and useful characteristics.


"Unlike some other applications of nanotechnology, which are further along in development, applications for pesticides are in their infancy," Harper said. "There are risks and a lot of uncertainties, however, so we need to understand exactly what's going on, what a particular nanoparticle might do, and work to eliminate use of any that do pose dangers."

Problems Linked to Chemo Could be Solved by Nanotechnology

A nanotechnology approach that potentially could eliminate the problems of side effects and drug resistance in the treatment of cancer has been developed by scientists.
Advertisement
A program is already addressing that at OSU, as part of the Oregon Nanoscience and Microtechnologies Institute.

The positive aspect of nanotechnology use with pesticides, researchers say, is that it might allow better control and delivery of active ingredients, less environmental drift, formulations that will most effectively reach the desired pest, and perhaps better protection for agricultural workers.

"If you could use less pesticide and still accomplish the same goal, that's a concept worth pursuing," Harper said.

But researchers need to be equally realistic about the dangers, she said. OSU labs have tested more than 200 nanomaterials, and very few posed any toxic concerns - but a few did. In one biomedical application, where nanoparticles were being studied as a better way to deliver a cancer drug, six out of 40 evoked a toxic response, most of which was linked to a specific surface chemistry that scientists now know to avoid.

"The emergence of nanotechnology in the pesticide industry has already begun, this isn't just theoretical," said David Stone, an assistant professor in the OSU Department of Environmental and Molecular Toxicology. "But pesticides are already one of the most rigorously tested and regulated class of compounds, so we should be able to modify the existing infrastructure."

One important concern, the researchers said, will be for manufacturers to disclose exactly what nanoparticles are involved in their products and what their characteristics are. Another issue is to ensure that compounds are tested in the same way humans would be exposed in the real world.

"You can't use oral ingestion of a pesticide by a laboratory rat and assume that will tell you what happens when a human inhales the same substance," Stone said. "Exposure of the respiratory tract to nanoparticles is one of our key concerns, and we have to test compounds that way."

Future regulations also need to acknowledge the additional level of uncertainty that will exist for nano-based pesticides with inadequate data, the scientists said in their report. Tests should be done using the commercial form of the pesticides, a health surveillance program should be initiated, and other public educational programs developed.

Special assessments may also need to be developed for nanoparticle exposure to sensitive populations, such as infants, the elderly, or fetal exposure. And new methodologies may be required to understand nanoparticle effects, which are different from most traditional chemical tests.

"These measures will require a coordinated effort between governmental, industry, academic and public entities to effectively deal with a revolutionary class of novel pesticides," the researchers concluded in their report.

The search for the perfect method to purify water continues, but there is hope on the horizon.
Advertisement
<< Codeine Must be Withdrawn
Condom Use Common Among US Teens but Not So Common Among Ol... >>