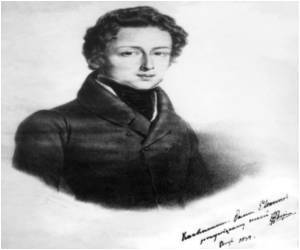 The famous Polish composer, Frederic Chopin, who experienced hallucinations during his relatively short life, probably had temporal lobe epilepsy, according to Researchers.

In her memoirs, the French novelist George Sand, who described lyrically how her lover, cursed by prodigy and doomed by frailty to an early grave, would be shaken by ghostly visions.

"The phantoms called him, clasped him, and instead of seeing his father and his friend smile at him in the ray of faith, he repelled their fleshless faces from his own and struggled under the grasp of their icy hands," wrote Sand.


But a study by a pair of Spanish neurologists tarnishes this compelling gothic tableau.

Chopin's alienation and hallucinations probably had more to do with a medical condition than the burden of the Romantic artist, it suggests.

In 1848, at a concert at a private house in Manchester, northern England, Chopin was playing his Sonata in B flat minor when he abruptly left the room but returned a short while later to finish the piece.

In a letter to George Sand's daughter -- which has never been published in any collection of his correspondence -- Chopin explained that he had been terrified to see "cursed creatures" emerging from the half-open case of his piano.

In other accounts by Sand and one of his pupils, Madame Streicher, Chopin was sometimes seized by a mental state that would leave him wild-eyed and his hair literally standing on end.

He himself described himself sometimes as being in a dreamy state -- in "imaginary spaces" -- and once said he felt "like steam."

The researchers look through the psychiatric states that could possibly explain the great composer's problems.

They rule out schizophrenia out because it usually takes the form of voices.

Migraines can induce hallucinations, but these can last up to half an hour, whereas Chopin's episodes were brief, and lasted only a few minutes or even seconds.

In addition, migraine auras without headache typically occur among patients over the age of 50. Chopin was only 39 when he died, of a respiratory illness.

Another psychiatric disease called Charles Bonnet syndrome is excluded, because it is linked to eye disorders, and there is no evidence that Chopin suffered from these.

Chopin did take opium, in the form of a tincture called laudanum, to ease his many physical problems. But the type of hallucinations he had do not correspond to opium-related visions -- and he experienced them years before taking the opium.

This leaves one big suspect: epilepsy of the temporal lobes, whose seizures can unleash brief, stereotyped visions of the kind experienced by Chopin and a condition called "jamais vu," or a dream-like disconnection from one's surroundings.

But the patient is not drowsy, nor does he lose a state of consciousness.

The authors point out that epilepsy was poorly understood in Chopin's day and could easily have been overlooked by his doctors, although they freely admit that this is only a "diagnostic guess."

Even so, it "could help to separate romanticised legend from reality and shed new light in order to better understand the man and his life," they say.

The study is published on Monday in Medical Humanities, a journal of the British Medical Association (BMA).

Epilepsy is a medical condition where the brain cells fire abnormal electrical signals that physically manifests as a 'Seizure'. There should be two or more seizures before the term epilepsy should be used.
Advertisement
<< Rising Indoor Winter Temperatures Linked To Obesity in US, ...
Gamma Camera Facility at Safdarjung Hospital >>