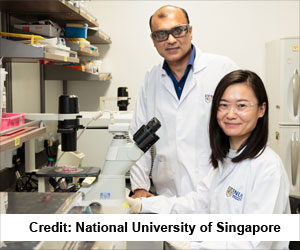 Nimbolide, a bioactive terpenoid compound derived from Azadirachta indica (Neem plant) was found to reduce the size of prostate tumour by up to 70 per cent and suppress its spread or metastasis by half, reveals research conducted by a team of international researchers led by Associate Professor Gautam Sethi from the Department of Pharmacology at the Yong Loo Lin School of Medicine at the National University of Singapore (NUS).

Prostate cancer is one of the most commonly diagnosed cancers worldwide. However, currently available therapies for metastatic prostate cancer are only marginally effective. Hence, there is a need for more novel treatment alternatives and options."Although the diverse anti-cancer effects of nimbolide have been reported in different cancer types, its potential effects on prostate cancer initiation and progression have not been demonstrated in scientific studies. In this research, we have demonstrated that nimbolide can inhibit tumour cell viability - a cellular process that directly affects the ability of a cell to proliferate, grow, divide, or repair damaged cell components - and induce programmed cell death in prostate cancer cells," said Assoc Prof Sethi.

PSA (Prostate Specific Antigen) test and Digital Rectal Examination are two tests that allow detection of prostate cancer at early stages.
Advertisement
‘Oral administration of nimbolide - bioactive compound derived from Neem plant, over 12 weeks shows reduction of prostate tumor size by up to 70 per cent and decrease in tumor metastasis by up to 50 per cent.’


The researchers observed that upon the 12 weeks of administering nimbolide, the size of prostate cancer tumour was reduced by as much as 70 per cent and its metastasis decreased by about 50 per cent, without exhibiting any significant adverse effects.

Prostate cancer is fast gaining as a common cancer form among men; more threatening since its symptoms often go unnoticed until it's too late. This quiz tests your knowledge on prostate cancer, its diagnosis and treatment options and is as mandatory for men as the screening tests mentioned here are!
Advertisement
"This is possible because a direct target of nimbolide in prostate cancer is glutathione reductase, an enzyme which is responsible for maintaining the antioxidant system that regulates the STAT3 gene in the body. The activation of the STAT3 gene has been reported to contribute to prostate tumour growth and metastasis," explained Assoc Prof Sethi. "We have found that nimbolide can substantially inhibit STAT3 activation and thereby abrogating the growth and metastasis of prostate tumour," he added.

The findings of the study were published in the April 2016 issue of the scientific journal Antioxidants & Redox Signaling. This work was carried out in collaboration with Professor Goh Boon Cher of Cancer Science Institute of Singapore at NUS, Professor Hui Kam Man of National Cancer Centre Singapore and Professor Ahn Kwang Seok of Kyung Hee University.

The neem plant belongs to the mahogany tree family that is originally native to India and the Indian sub-continent. It has been part of traditional Asian medicine for centuries and is typically used in Indian Ayurvedic medicine. Today, neem leaves and bark have been incorporated into many personal care products such as soaps, toothpaste, skincare and even dietary supplements.

The team is looking to embark on a genome-wide screening or to perform a large-scale study of proteins to analyse the side-effects and determine other potential molecular targets of nimbolide. They are also keen to investigate the efficacy of combinatory regimen of nimbolide and approved drugs such as docetaxel and enzalutamide for future prostate cancer therapy.

Vent Forte (Theophylline) Hearing Loss Calculator Sanatogen Nutam (400mg) (Piracetam) The Essence of Yoga Loram (2 mg) (Lorazepam) Noscaphene (Noscapine) Pregnancy Confirmation Calculator Iron Intake Calculator How to Reduce School Bag Weight - Simple Tips
This site uses cookies to deliver our services. By using our site, you acknowledge that you have read and understand our Cookie Policy, Privacy Policy, and our Terms of Use