Mystery of How Cells Keep from Bursting Solved 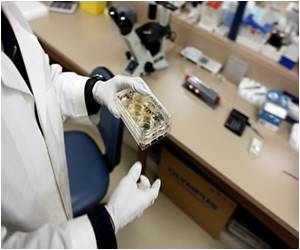 A long-sought protein that facilitates one of the most basic functions of cells: regulating their volume to keep from swelling excessively has been discovered by a team of scientists.

The identification of the protein, dubbed SWELL1, solves a decades-long mystery of cell biology and points to further discoveries about its roles in health and disease-including a serious immune deficiency that appears to result from its improper function.

An article about the natural remedies available at home to treat diabetes effectively and efficiently.
Advertisement

"Knowing the identity of this protein and its gene opens up a broad new avenue of research," said the study''s principal investigator Ardem Patapoutian, a Howard Hughes Medical Institute (HHMI) Investigator and professor at TSRI''s Dorris Neuroscience Center and Department of Molecular and Cellular Neuroscience.


The report appears as the cover story in the April 10, 2014 issue of the journal Cell.

Water passes through the membrane of most cells with relative ease and tends to flow in a direction that evens out the concentration of dissolved molecules or "solutes." "Water in effect follows the solutes," explained Zhaozhu Qiu, a member of the Patapoutian laboratory who was first author of the study. "Any decrease in the solute concentration outside a cell or an increase within the cell will make the cell swell with water."

Diabetes screening is done using blood tests like fasting blood sugar and hemoglobin A1c levels. Diabetes affects 8.3% Americans and about 10% Indians.
Advertisement
For decades, experiments have demonstrated the existence of a key relief valve for this swelling: an unidentified ion channel in the cell membrane, dubbed VRAC (volume-regulated anion channel). VRAC opens in response to cell swelling and permits an outflow of chloride ions and some other negatively charged molecules-which water molecules follow, thus reducing the swelling.

"For the past 30 years, scientists have known that there is this VRAC channel, and yet they haven''t known its molecular identity," said Patapoutian.

Finding the proteins that make VRAC and their genes was a goal that had eluded prior attempts because of the technical hurdles involved. However, in the new study, Qiu and his colleagues were able to set up a rapid, "high-throughput" screening test based on fluorescence. They engineered human cells to produce a fluorescent protein whose glow would be quenched when the cells became swollen and VRAC channels opened.

With the help of automated screening specialists at the La Jolla-based Genomics Institute of the Novartis Research Foundation (GNF), which recently began a broad new collaboration agreement with TSRI, the team cultured large arrays of the cells and, using a technique known as RNA interference, blocked the activity of a different gene for each clump of cells.

The idea was to watch for the groups of cells that continued to glow-indicating that the gene inactivation had disrupted VRAC.

In this way, with several rounds of tests, the team sifted through the human genome and ultimately found one gene whose disruption reliably terminated VRAC activity. It was a gene that had been discovered in 2003 and catalogued as "LRRC8." Although it appeared to code for a cell-membrane-spanning protein-as one would expect for an ion channel-almost nothing else was known about it.

The team renamed it SWELL1.

Investigating further, the researchers showed that SWELL1 does indeed localize to the cell membrane as an ion channel protein would. Experiments by Adrienne Dubin, a staff scientist at TSRI, showed that certain mutations of SWELL1 alter the VRAC channel''s ion-passing properties-indicating that SWELL1 is a central feature of the ion channel itself.

"It is at least a major part of the VRAC channel for which cell biologists have been searching all this time," said Patapoutian.

Patapoutian, Qiu and their colleagues now will study SWELL1 further, including an examination of what happens to lab mice that lack the protein in various cell types.
Curiously, the gene for SWELL1 was first noted by scientists because a mutant, dysfunctional form of it causes a very rare type of agammaglobulinemia-a lack of antibody-producing B cells, which leaves a person unusually vulnerable to infections. That suggests that SWELL1 is somehow required for normal B-cell development.

"There also have been suggestions from prior studies that this volume-sensitive ion channel is involved in stroke because of the brain-tissue swelling associated with stroke and that it may be involved as well in the secretion of insulin by pancreatic cells," said Patapoutian. "So there are lots of hints out there about its relevance to disease-we just have to go and figure it all out now."

Other co-authors of the study, "SWELL1, a plasma membrane protein, is an essential component of volume-regulated anion channel," were Jayanti Mathur, Buu Tu, Kritika Reddy, Loren J. Miraglia and Anthony P. Orth of GNF, and JÃ¼rgen Reinhardt of the Novartis Institutes for Biomedical Research in Basel, Switzerland.

The research was supported by the National Institutes of Health (grant R01 DE022115).

Immune Response to Cancer Cuts for Both Good and Bad

An immune response that kills cancer cells and the one that conversely stimulates tumor growth can be as close as a double-edged sword , say researchers at the University of California.
Advertisement
<< By Reducing Fertility of Female Mosquitoes, Researchers Dev...
Italian Man Gets Jail for Having Noisy Sex >>

Nutam (400mg) (Piracetam) Daily Calorie Requirements Find a Hospital Calculate Ideal Weight for Infants Sinopril (2mg) (Lacidipine) Blood - Sugar Chart Indian Medical Journals Drug Side Effects Calculator Blood Pressure Calculator Find a Doctor
This site uses cookies to deliver our services. By using our site, you acknowledge that you have read and understand our Cookie Policy, Privacy Policy, and our Terms of Use