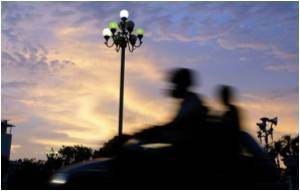 Motorcycle helmets, long known to reduce the number of brain injuries and deaths from crashes, is also associated with a lower risk of cervical spine injury, according to a research.

"We are debunking a popular myth that wearing a helmet while riding a motorcycle can be detrimental during a motorcycle crash," says study leader Adil H. Haider, M.D., M.P.H., an assistant professor of surgery at the Johns Hopkins University School of Medicine. "Using this new evidence, legislators should revisit the need for mandatory helmet laws. There is no doubt that helmets save lives and reduce head injury. And now we know they are also associated with a decreased risk of cervical spine injury."

For more than two decades, the researchers say, activists lobbying against universal helmet laws have cited a small study suggesting that, in the event of a crash, the weight of a helmet could cause significant torque on the neck that would be devastating to the spine. But results of the new study, published online in the Journal of the American College of Surgeons, shows that helmeted riders were 22 percent less likely to suffer cervical spine injury than those without helmets. The study reviewed and mined the National Trauma Databank, looking through information on more than 40,000 motorcycle collisions between 2002 and 2006.


Even with what researchers say are mountains of evidence that helmets reduce mortality and traumatic brain injury after a collision, many states, including Florida, Pennsylvania and Texas, have over the past 15 years repealed their mandatory helmet use laws after lobbying from motorcycle riders, Haider says. Anti-helmet lobbyists often cite a 25-year-old study which found more spine injuries in helmet wearers. That study, has been criticized by many, including the National Highway Traffic Safety Administration, because of flawed statistical reasoning. "Additionally, helmet technology has significantly improved since that time now helmets are much lighter but even sturdier and more protective" Haider says.

Helmets Don't Contribute to Your Safety on the Road

A research conducted by University of Sydney suggests that forcing people to wear bike helmets is of no use in road safety measures.
Advertisement
Forty years ago, Haider says, nearly all states required helmets for motorcyclists of any age in the United States. Today, helmets are mandatory for all riders in only 20 states, Puerto Rico and the District of Columbia.

Motorcycle use has risen sharply over the past 10 years in the United States. Since 1997, motorcycle injuries in the U.S. have increased by roughly 5,000 per year and motorcycle fatalities have nearly doubled, according to the new journal article.

Haider's study, like many others before, found a reduction in risk of traumatic brain injury in helmet wearers (65 percent) and decreased odds of death (37 percent). But the new paper, Haider says, is the strongest evidence yet that helmets significantly reduce cervical spine injury, which can result in paralysis.

Head injury or traumatic brain injury is a leading cause of disability among children and young adults that leads to varying degrees of physical and mental stability. Fortunately, it is also one of the preventable brain disorder.
Advertisement
<< New Treatment That Freezes Extra Fat
Memory Problems may Indicate Stroke Risk >>

Blacks in US seem to have little defence against racial disparities. Even helmets are of no help when it comes to accidents.
Advertisement
News A-Z
A B C D E F G H I J K L M N O P Q R S T U V W X Y Z
What's New on Medindia

Diaphragmatic Hernia Drug - Food Interactions Accident and Trauma Care Color Blindness Calculator Vent Forte (Theophylline) Daily Calorie Requirements The Essence of Yoga Find a Hospital Sanatogen Sinopril (2mg) (Lacidipine)
This site uses cookies to deliver our services.By using our site, you acknowledge that you have read and understand our Cookie Policy, Privacy Policy, and our Terms of Use  Ok, Got it. Close
×