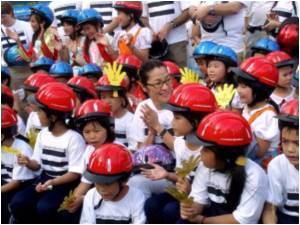 Blacks in US seem to have little defence against racial disparities. Even helmets are of no help when it comes to accidents, it looks like. For they were 1.5 times more likely to die from their injuries than similarly injured whites, despite wearing helmets, according to a new study by Johns Hopkins researchers.

"For reasons that we are still trying to figure out, one size of injury prevention does not fit all groups of people and just wearing a helmet is not enough," says Adil Haider, M.D., M.P.H., an assistant professor of surgery at the Johns Hopkins University School of Medicine and the study's senior author. "Helmet for helmet, African-Americans have more lethal injuries."

Haider, who is also co-director of the Johns Hopkins Center for Surgical Trials and Outcomes Research, suspects several factors may combine to account for the gap in survival between black and white victims. Previous studies of other accidents and illnesses have shown that lack of health insurance, reduced access to care, poorer quality of care and a greater number of pre-existing illnesses or injuries contribute to racial differences in survival. It is also possible, he says, that riders of different races may prefer different types of helmets or more dangerous types of motorcycles. More research is needed, he says, to determine what role, if any, these issues may play.


Motorcycle crashes injure roughly 88,000 people a year in the United States and kill 4,810 annually. The rate of fatal motorcycle crashes has been steadily rising for the past decade and now account for nearly 1 in 8 motor vehicle deaths.

Research published in the Sept. 14 issue of Neurology , the medical journal of the American Academy of Neurology says that African Americans with muscular dystrophy die early
Advertisement
In the new study, Haider and surgical resident Dr. Joseph Crompton reviewed National Trauma Data Bank information on 68,840 people involved in motorcycle crashes between 2002 and 2006. Along with the finding that even after controlling for factors such as insurance status, gender and injury severity, black crash victims were 1.5 times more likely to die from their injuries than similarly injured white victims. This was so despite the fact that black motorcycle crash victims were 30 percent more likely to be wearing helmets when injured than were white crash victims. The research also found that whites who were not wearing helmets were less likely to die than African-Americans who were wearing helmets, and that the highest mortality rates were among African-American motorcyclists without helmets.

Helmets have been proven to reduce traumatic brain injury deaths following motorcycle crashes and reduce the cost of hospital stays.

But with this new study in mind, Haider says, more focus should be placed on injury-prevention programs that go beyond imploring motorcyclists to wear helmets, since they alone do not appear to be doing enough to protect some crash victims  particularly African-Americans  from death.

The findings have been published in the August issue of the American Journal of Surgery.

Death could be a leveler. But some are always more equal, even in death, at least in the US. Uninsured minority pedestrians hit by cars are at a significantly higher risk of death.
Advertisement
Advertisement