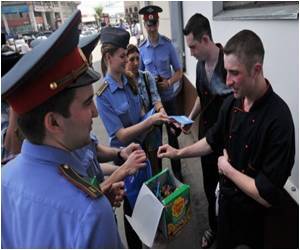 By the age of 23, almost 1/3 of Americans have been arrested for some crime, besides a minor traffic violation, according to researchers at University of North Carolina-Charlotte.

The current figure is significantly higher than the 22% found in a 1965 study. The increase may be a reflection of the justice system becoming more punitive and more aggressive in its reach during the last half-century.

Lie Detector  What Lies Beneath

Lie detector is a device used to establish the presence of truth or falsehood by recording significant alterations in blood pressure, pulse etc., during a question and answer round on the accused.
Advertisement

The new study is an analysis of data collected between 1997-2008 by the Bureau of Labor Statistics.


Lead author of the study, Robert Brame said, "Arrest is a pretty common experience. The question excluded only minor traffic offenses, so youth could have included arrests for a wide variety of offenses such as truancy, vandalism, underage drinking, shoplifting, robbery, assault and murder  any encounter with police perceived as an arrest. Some of the incidents perceived and reported by the young people as arrests may not have resulted in criminal charges."

Brains Failure to Value Others Leads to Crimes Against Humanity

A failure in the critical part of the brain crucial for social interaction may well contribute to a person becoming callous enough to inflict human atrocities, suggests a new study.
Advertisement
Robert Brame hopes the research would alert physicians to signs that their young patients were at risk. He said, "If doctors can intervene, it can have big implications for what happens to these kids after the arrest, whether they become embedded in the criminal justice system or whether they shrug it off and move on."

The study is published in the journal Pediatrics.

From stress to suicide to crimes, the global meltdown seems to be taking a nasty toll of the West. UK is reporting a dramatic increase in theft, burglaries and fraud.
Advertisement
<< UV Rays Prevent the Spread of Chickenpox
Sperm Donor Issued Warning by US FDA >>