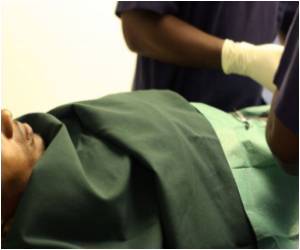 Hndreds of Filipino teen boys gathered for a mass 'circumcision party' in Manila in an attempt to make it to the Guinness Book of World Records.

The young boys queued as doctors carried out the surgery on dozens of makeshift operating tables in a stadium in Marikina city, east of Manila.

Activists seeking to ban circumcision in San Francisco have apparently collected more than enough signatures to get their measure on the fall ballot.

While some boys cried in their mothers' arms, others bit their shirts to stifle sobs. However, there were some who came out smiling and swelling with pride, reports the Daily Mail.


"I'm a big boy now," bragged one boy who had just finished the surgery. As a tradition, young Filippino boys are circumcised during their school summer break from March to May.

Marikina city officials hope to establish a world record for the number of people attending a mass circumcision.

Jewish groups and others are up at arms over an attempt to outlaw male circumcision in San Francisco by putting the issue to a popular vote.
<< Much-Touted T-Cell Therapy For Multiple Sclerosis Patients ...
Research on The Workings of Cancer-Driving Enzyme >>

Representatives in Sengal and Mali villages have agreed to ban the practice of female genital mutilation, reported a local non-governmental organization.

Swaziland launched Monday a drive to encourage men to volunteer for circumcision in a bid to curb the spread of HIV, of which the small kingdom has the highest infection rate in the world.
News A-Z
A B C D E F G H I J K L M N O P Q R S T U V W X Y Z
What's New on Medindia