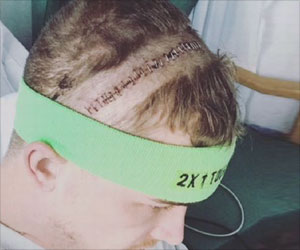 A 28-year-old man was diagnosed with a brain tumor that was in the size of a Cadbury's Creme Egg. He was kept awake throughout the surgery, while it was being removed by surgeons.

Matt Carpenter of east Hull was diagnosed with a low-grade glioma brain tumor . Some tests were performed before surgeons could finalize on the surgery.

Advertisement
‘Matt Carpenter was kept awake throughout the surgery because of the position of the tumor and doctors were concerned not to cause damage to his speech or movement.’

Matt said: "I was working a lot so just thought nothing of it. I had a CT scan and an MRI scan, and it was confirmed it was a low-grade glioma brain tumor on my frontal right lobe, and it may have been there for quite some time."


He was kept awake throughout the surgery because of the position of the tumor as doctors did not want to cause damage to his speech or movement.
Advertisement
The tumor was removed in March. His left side of the body was numb after the operation, and he thought that he would not be able to move and it would be a permanent thing.

Matt is motivated to fundraise for Hull Homeless Community Project after he worked in a homeless hostel was "inspired" to give back to them and is undertaking a variety of hellish challenges for the project.

He said: "Throughout the whole time they were on hand to give me some support and I was getting out and helping them help others. I've been doing outreach stuff and going out and meeting rough sleepers for around a year, and I was already going to do some fundraising for them before this all happened."

Matt is taking part in the Hull 10K and the Skipton Tough Mudder, which is going to take place in June and is also planning to do Europe's toughest tough mudder next month in Grantham to raise funds.

Many people have advised him to take things slow, but he wants to go full-steam ahead and to raise as much as possible to support the project.

Astrocytoma
Astrocytomas are primary brain tumors and the most common type of glial tumors. There are many ......