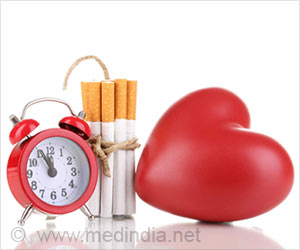 Smoking increases the risk of heart failure among African Americans, according to a new study in the American Heart Association's journal Circulation.

"Previous research has focused on smoking and atherosclerosis, or hardening of the arteries, but not enough attention has been given to the other bad effects of smoking on the heart," said Michael E. Hall, M.D., M.S., a cardiologist at the University of Mississippi Medical Center in Jackson and senior study author. "With increasing rates of heart failure, particularly among African Americans, we wanted to look at the link between smoking and heart failure."

Advertisement
‘Smoking affects the structure and function of the left ventricle which may increase the risk of developing heart failure.’

Patients with heart failure are unable to pump enough blood and oxygen to their bodies to remain healthy. According to the American Heart Association, 1 of every 5 Americans over the age of 40 is expected to develop heart failure in their lifetime--and that number is growing.


The study included 4,129 participants in the Jackson Heart Study with a median follow up of 8 years. At enrollment, none of the participants (average age 54) had heart failure or hardening of the arteries, which can lead to heart failure. Among participants, there were 2,884 people who never smoked, 503 who were current smokers and 742 who were former smokers. During the study period, there were 147 hospitalizations for heart failure.
Advertisement
The study found hospitalizations for heart failure were:
The research team also found a link between current smoking and a larger left ventricle, the heart's main pumping chamber, which showed early signs that the left ventricle was not working properly. Hall said these changes in the left ventricle's structure and function likely put a person at greater risk of developing heart failure.

Importantly, researchers did not find a link between former smokers and heart failure hospitalization or changes in the left ventricle.

The study took into account high blood pressure, diabetes, body mass and other factors that might have biased results. Researchers said the association between smoking, heart failure hospitalizations and left ventricle changes remained even after also accounting for those participants who developed coronary heart disease during the study period.

Study limitations include the fact that the participants lived in only three counties in the Jackson, Mississippi metropolitan area, so findings may not be generalizable to African Americans living elsewhere.

"Still, the study clearly underscores the harms of smoking and the benefits of quitting," said Hall. As healthcare professionals, we would recommend that all patients quit smoking anyway, but the message should be made even more forcefully to patients at higher risk of heart failure."

Cigarette Smoking - A Silent Killer
Smoking kills the smoker silently, pushing him towards serious illnesses, which slowly lead to ......
Smoking Just 'One' Cigarette May Up Risk of Heart Attack, Stroke
Smoking just one cigarette doubles the risk of heart attack and stroke in both men and women and is ...