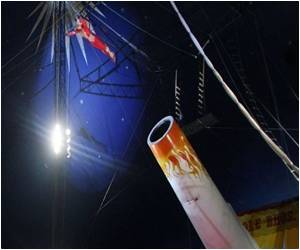 A 23-year old British stuntman died after a safety net failed during the human cannonball event in southern England.

Hundreds of people at the Kent County Showground in Detling watched on as the man plunged to the ground after being fired around 40 feet (12 meters) into the air.

Bosses behind 'The Hangover' sequel have confirmed that a stuntman, who was injured in a horrific onset accident, has been moved to a hospital where he is receiving advanced care .
Advertisement

"The last picture I've got of him, you can see the net is flat on the floor," eye-witness Rob Hutchinson said. "It's not up in the air, and he is coming down head-first towards the ground. I saw him hit the floor and bounce.


"It was deathly silent," he added. "That's when the announcer said, there's been a bit of an accident."

According to Hutchinson's wife, the net "completely collapsed the minute the cannon went off".

Beware of death due to accident at age 40

An Australian study has indicated that humans are more prone to dying from accidents during their 40th year.
Advertisement
A Kent Police spokesman said: "A man taking part in a human cannonball event this afternoon has died after it is believed a safety net failed to engage.

"He was taken to Maidstone General Hospital but died shortly afterwards.

"His next-of-kin have been informed but he has yet to be formally identified."