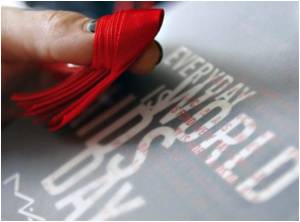 Interventions to promote healthy behavior, appears beneficial for African-American couples who are at high risk for chronic diseases especially if one of the individuals is living with HIV. Healthy behaviors include eating more fruits and vegetables, increasing physical activity and participating in cancer screenings.

As background information in the article, the authors write that the medications being used to treat HIV, particularly highly active antiretroviral therapy (HAART), have been so successful for many individuals that they are now living longer and are at risk for developing other chronic diseases, such as cardiovascular disease and diabetes. "The issue of comorbid chronic disease is particularly worrisome for the 48 percent of people living with HIV in 2007 who were African American," the authors note. The report is published in the Archives of Internal Medicine.

Nabila El-Bassel, Ph.D., and colleagues from the National Institute of Mental Health Multisite HIV/STD Prevention Trial for African-American Couples Group, tested how well an intervention would work that addressed multiple health-related behaviors in African-American heterosexual couples in which one partner was HIV-positive and the other was not. The 535 couples (1,070 participants) were randomized into two groups: 520 individuals (260 couples) participated in couple-focused HIV/STD risk reduction focusing on preventing HIV/STD transmission and acquisition and 550 individuals (275 couples) were in the individual-focused health promotion group to influence behaviors linked to the risk of cardiovascular diseases, cerebrovascular diseases, diabetes mellitus and certain cancers, including physical activity, fruit and vegetable consumption, fat consumption, breast and prostate cancer screenings and alcohol use. Both interventions consisted of eight weekly structured two-hour sessions. Participants independently reported their health behaviors at the beginning of the study, immediately after the interventions, and six to 12 months post-intervention. The average age of the participants was about 43 years and the HIV-positive partner was female in 60.4 percent of the couples.


"Health promotion intervention participants were more likely to report consuming five or more servings of fruits and vegetables daily and adhering to physical activity guidelines compared with HIV/STD intervention participants," the authors found. "In the health promotion intervention compared with the HIV/STD intervention, participants consumed fatty foods less frequently, more men received prostate cancer screening, and more women received a mammogram. Alcohol use did not differ between the intervention groups." The authors suggest that it is "possible that targeting couples enhanced efficacy. Research suggests that health promotion strategies that incorporate family members and support networks are more effective than individual-focused strategies and may be especially appropriate for African Americans."

Animation of Heart Attack symptoms. Heart attack is caused due to ischemia of the heart muscles that results in pain and the other symptoms of heart attack.
Advertisement
"In conclusion, African Americans are at high risk for morbidity and mortality from chronic diseases and are less likely to report engaging in behaviors associated with reduced risk of such diseases and to detect them at an early stage. Moreover, the risk of chronic disease is of particular concern for African Americans living with HIV because HIV and its treatment with HAART are associated with increased risk. The present study revealed low rates of fruit and vegetable consumption, physical activity and cancer screening in African American individuals in HIV-serodiscordant couples. Accordingly, this study is important, demonstrating that a theory-based contextually appropriate intervention that teaches skills caused positive changes on multiple behaviors linked to chronic diseases in African American members of HIV-serodiscordant couples."

In an accompanying editorial, Mitchell H. Katz, M.D., from the Los Angeles Department of Health Services, Los Angeles, notes that "if specialty care is less needed than it used to be for HIV-infected patients, it turns out primary care is more needed. Owing to the advances in HIV treatment, our patients are no longer dying: They are aging!"

"Although serodiscordant couples are a highly specialized population, there is no reason to believe that their intervention would not work among other HIV-infected persons. Certainly, this study should encourage others to attempt group health promotion classes because, as I often tell my HIV-infected patients with diabetes, liver disease or uncontrolled hypertension, ''It''s not HIV that''s going to kill you.''"