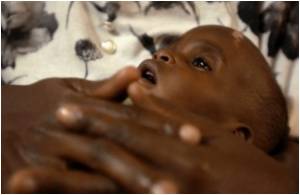 Recent study conducted by scientists in baboons sheds light on why people who are malnourished in early childhood often experience poor health as adults.

The study found that baboons born in times of famine are more vulnerable to food shortages later in life.

After the plains of southern Kenya experienced a severe drought in 2009 that took a terrible toll on wildlife, researchers at the Duke and the Princeton Universities looked at how 50 wild baboons coped with the drought, and whether the conditions they faced in infancy played a role.

During the drought, the grasslands the animals depend on for food dried up and watering holes disappeared, leaving many animals starving or weak from hunger.
Advertisement
"We lost 98 percent of the wildebeest population, 75 percent of the zebra population and 30 percent of the elephant population," said study co-author Susan Alberts from Duke University.

Most baboons made it, but the drought left them underweight and many females stopped ovulating.

Drought babies born to higher-status mothers were less affected by the 2009 event.

The findings help explain why people who are malnourished in early childhood go on to have higher rates of obesity, diabetes and heart disease as adults.

"It's bad to be born in bad times, but with the right social or economic environment, that can be mitigated," Alberts added.

Most of the Elderly Patients in Emergency Department are Malnourished
Among the emergency department patients age 65 and older, more than half of those seen in UNC ......

Nutrition Therapy may Not Lead to Long-Term Benefits for Malnourished Children
Researchers suggest that while nutrition therapy can save the lives of millions of malnourished ......

In Sunderbans A Third of All Kids Malnourished
The Sunderbans, the world's largest mangrove forests, has seen rampant malnutrition among children....