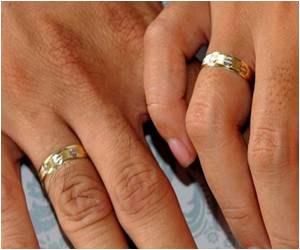 A new survey has revealed that despite the growth of social networking sites and online matrimonial sites, a majority of Indians still swear by the traditional arranged marriage.

Around 75 percent of Indians, including 82 percent women and 68 percent, are conservative and prefer arranged marriages, according to The Taj Wedding Barometer, a survey conducted by the Taj Group of Hotels, Mumbai, which was released here Saturday.

While women prefer their parents' and family members' decisions in deciding their future life-partner, men tend to take an independent decision about their future spouse.

The survey, conducted by IPSOS, in which 1,000 young people aged between 18-35 in 10 cities were interviewed, also found that both men and women prefer the first marriage proposal in private.
Advertisement
While 33 percent of Indians in western India preferred a straight-forward proposal without frills, 21 percent from the south (both male-female) wanted women to initiate the proposal, against the national average of 10 percent who felt men should take the first step.

However, 13 percent of all men wanted women to initiate the proposal compared to only eight percent of women who expressed the same view.

After the proposal, the engagement ceremony was the top favourite of all pre-wedding functions followed by the "sangeet" ceremony at 81 percent and other religious functions trailing at 71 percent.

Women considered bridal grooming very important, with 47 percent choosing it as an integral part for the pre-nuptial preparations.

Facials topped the grooming package at 46 percent, followed by spas and beauty treatments at 23 percent. As many as 50 percent from the south gave more importance to facials compared to 46 percent in the north and 31 percent in the west.

As for the three most important aspects of a wedding, the respondents put 73 percent (77 percent of the women and 69 percent men) for the wedding attire, 65 percent for the wedding day and the wedding feast coming at 48 percent.

South Indian and Chinese cuisine ranked the most preferred for weddings at 56 percent, and the rest preferring north Indian cuisine. A majority said they would serve five-15 dishes to their wedding invitees.

Post-wedding, 80 percent respondents preferred honeymoons at conventional romantic destinations within a week of the marriage.

Goa ranked first in the list, followed by Ooty and Srinagar (Kashmir) on the domestic honeymoon circuit.

On the international front, while 46 percent of men preferred European destinations for a honeymoon, 36 percent women selected the US, though 25 percent of all women preferred buying a wedding-cum-honeymoon package from a five-star or seven-star hotel.

The Taj Group's senior vice president, sales and marketing Deepa Misra-Harris said that weddings at the hotel have always been iconic and 'most enduring', having a special place in the hearts of the guests since a century.

Tata Institute of Social Sciences' associate professor and Centre for Human Ecology chairperson Sujata Sriram said: "Today, marriage is increasingly driven by a desire for companionship and emotional support. Grooming is also catching on in India, as men are becoming increasingly metrosexual."

She added: "There is a higher willingness to spend on looking good and this is evident with the rise of male aesthetics in India which can also be seen across film, literature and entertainment."

Source: IANS
Advertisement
<< 'Suit Up to be More Productive at Work' Bosses tell Employee...
Pot can be Detected in Blood of Daily Smokers During a Mont... >>

Arranged Marriages More Likely to Give Rise to Mate Guarding
Guarding your mate is a biological phenomenon.And this is common among many different species ......