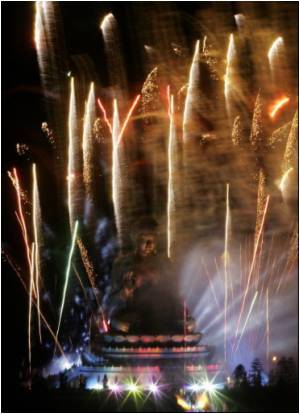 Thousands of people filled Trafalgar Square in London to celebrate Year of the Dragon.

London Mayor Boris Johnson said the big turnout "shows the way the world economy is going", as people braced the chilly weather to see performers parade through the city and sample Chinese food.

Brian Wu lifted his 6 year old daughter onto his shoulders at The Mirage hotel-casino so the girl could get a better view at the dragons dance to the loud drumbeats.
Advertisement

Trafalgar Square is around the corner from London's Chinatown district.


The festivities to welcome in the Year of the Dragon, which officially started on January 23, included a dramatic firecracker display and performers from Britain and China, while acrobats dressed in elaborate dragon outfits leapt from podiums to a backdrop of heavy percussion.

Predictions for the Year of the Dragon

China's feng shui masters tackle the big issues with their predictions for the Year of the Dragon.
Advertisement
"It's an amazing occasion and we've never seen a crowd quite as big as this in all the years that we've been doing it. I think it shows the way the world economy is going," Johnson said at the event.

"London is a global city; you've got more Chinese students here in London contributing to the London economy than any other city in the world and I think they love it because it's a safe city.

"The point of this kind of event is to celebrate the Chinese New Year but also to intensify those links between London and China."

Zhang Qin, a Chinese traditional doctor, told AFP: "In London, Chinese New Year is so nice. This city makes the Chinese people and the English people get together and makes them happy."

A billion-plus Asians welcomed the Year of the Dragon on January 23 with a cacophony of fireworks, hoping the mightiest sign in the Chinese zodiac would usher in the wealth and power it represents.

From Malaysia to South Korea, millions travelled huge distances to reunite with their families for lunar New Year -- the most important holiday of the year for many in Asia -- indulging in feasts or watching dragon dances.

Reality star Kim Kardashian's New Year resolution is that she is hoping to tone down her highly publicized life and be more simple in 2012.
Advertisement
<< Raspberry-scented Jeans
Environment Conducive to Growth of Blood-Forming Stem Cells... >>

Calculate Ideal Weight for Infants Hearing Loss Calculator Noscaphene (Noscapine) Nutam (400mg) (Piracetam) Find a Hospital Pregnancy Confirmation Calculator Drug Interaction Checker The Essence of Yoga Accident and Trauma Care Indian Medical Journals
This site uses cookies to deliver our services. By using our site, you acknowledge that you have read and understand our Cookie Policy, Privacy Policy, and our Terms of Use