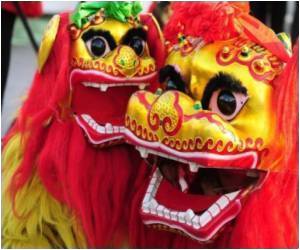 Brian Wu lifted his 6 year old daughter onto his shoulders at The Mirage hotel-casino so the girl could get a better view at the dragons dance to the loud drumbeats. For Wu's daughter, Yvonne, this is what Chinese New Year is all about. The Wu family, who live near Los Angeles, have celebrated the holiday on the Las Vegas Strip every year she and her 8-year-old brother have been alive.

Like thousands of American Chinese, the family flocks in for lion dances, special meals, Canto-pop concerts and elaborate decorations that have made this gambling capital a key destination for the event.

Asians' love of gambling is so strong that the equivalent of five Las Vegases in the region will not be enough to satisfy demand, US gaming tycoon Sheldon Adelson said Wednesday.
Advertisement

The two-week Chinese New Year period, which began on February 3 and celebrates the Year of the Rabbit, is now the second biggest wagering event of the year for Las Vegas, tying New Year's Eve and just behind the Super Bowl which, this year, happens to also fall the same weekend.


While resorts here have been throwing Chinese New Year events since Caesars Palace did the first in 1975, the relationship between Las Vegas and China has blossomed over the past decade.

Every child deserves a great place to play and the children of North Las Vegas will receive just that - a playground built from the hard work of caring volunteers.
Advertisement
The Vegas gaming companies MGM Resorts, Wynn Resorts and Las Vegas Sands now own elaborate casino-resorts in the Chinese special administrative region of Macau, and the Las Vegas Convention and Visitors Authority opened a tourism office in Shanghai in 2008.

Macau has eclipsed Las Vegas as the world's gaming destination with the most wagering and a new Singapore casino owned by Las Vegas Sands has proved stunningly profitable.

And yet that seems to have merely whetted the Chinese desire to see Las Vegas. The city greeted more than 100,000 Chinese tourists last year, up from about 87,000 in 2006, despite there being no direct flights.

"With the proliferation of gaming, people see the Macaus and the Singapores of the world and say, 'This is great, but let's go to the Entertainment Capital of the World, let's go to Las Vegas," said Greg Shulman, vice president of international marketing for MGM Resorts International, which owns the Mirage and Bellagio casinos.

"I think overall it's helped. Having a property over there that's recognized and established there is really important. It's become significantly easier to move our guests from there to Las Vegas for a different experience."

Those heavily sought-after Asian high rollers are ferried across the Pacific Ocean in lavish jets for Chinese New Year and then treated to private banquets attended by Chinese celebrities and showered with lavish gifts by hotel executives.

"We will have lion dances at five of our properties, and the focal point of our weekend is our Chinese New Year gala on Saturday night, which is a multimillion-dollar affair for 3,000 of our best players," said Shulman, whose company opened MGM Grand Macau in 2007.

Across the city, hotels like Caesars Palace and The Venetian erect massive banners with the Chinese New Year greeting, "Gung Hay Fat Choy" in Chinese characters. Red Chinese paper lanterns and citrus trees are ubiquitous and Cantopop megastar Jacky Cheung performs on Sunday at The Colosseum at Caesars Palace.

The Bellagio decked out its Conservatory for the holiday with a 12-foot-tall (four meter) rabbit made of 4,000 live plants as well as a 35-foot junk boat with a 38-foot mast made of cedar and teak woods. At the Palazzo resort, an atrium area this year features a 16-foot-tall stuffed rabbit.

Chinese restaurants all over the city offer special New Year's menus, adding some traditional dishes or renaming existing offerings with lucky or upbeat words. It's not unusual for a family to spend more than $20,000 for a Chinese New Year dinner, said Richard Chen, the executive chef at the Wing Lei restaurant in the Wynn Las Vegas resort. The restaurant imports abalone at more than $2,000 a pound and bird's nest at $1,600 a pound for the festivities.

At least 15 resorts scheduled lion and dragon dances this week, typically starting out in the porte-cochere, where the costumed dancers light firecrackers before roaming the casino. At the thresholds of high-limit baccarat areas, they dance and fling lettuce, a symbol of prosperity.

"By and large, this is the major event of the year just in terms of the quality of gaming customers," said Michael Weaver, vice president for marketing for Caesars Entertainment. "There are fewer players than on New Year's Eve, but the type of player is of great significance."

Shanghai students may have topped a recent global survey but educators in China are not rejoicing, saying the country has a long way to go before rote learning and test-taking turn into innovation.
Advertisement
Advertisement

Stepping into a New Year means new promises and resolutions. As a parent, you may want to know some ...
This site uses cookies to deliver our services.By using our site, you acknowledge that you have read and understand our Cookie Policy, Privacy Policy, and our Terms of Use  Ok, Got it. Close
×