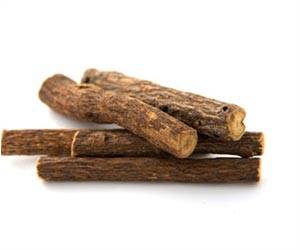 A promising anti-diabetic substance has been identified in the amorfrutin class of natural substances.

It provides the raw material for liquorice candy, calms the stomach and alleviates diseases of the airways: liquorice root.

Chosen as the "Medicinal plant 2012", the root has been treasured in traditional healing since ancient times.


Researchers at the Max Planck Institute for Molecular Genetics in Berlin have now discovered that liquorice root also contains substances with an anti-diabetic effect.

These amorfrutins not only reduce blood sugar, they are also anti-inflammatory and are very well tolerated. Thus, they may be suitable for use in the treatment of complex metabolic disorders.

Natural substances have a surprising and often largely unexploited potential in the prevention and treatment of common diseases.

For example, liquorice root Glycyrrhiza contains different substances that help to alleviate disorders of the airways and digestive system. It has been used for millennia in traditional healing and is mainly administered in the form of tea.

A team of researchers working with Sascha Sauer from the Max Planck Institute for Molecular Genetics in Berlin has now discovered that the plant from the papilionaceae or leguminous family might also be effective in the treatment of adult (type 2) diabetes.

The scientists identified a group of natural substances with an anti-diabetic effect, the amorfrutins, in the plant's edible root.

The substances, which have a simple chemical structure, are not only found in liquorice root, but are also in the fruit of the Amorpha fruticosa bush. The new anti-diabetic agents were named after this plant, which is native to the US, Canada and Mexico.

As the researchers demonstrated using diabetic mice, the amorfrutins not only have characteristics that reduce blood sugar, they are also anti-inflammatory in their effect. Moreover, they also prevent fatty liver - a common disease caused by excessively fat-rich nutrition.

"The health-beneficial effects are based on the fact that the amorfrutin molecules dock directly onto a receptor in the nucleus called PPAR (gamma)," explained Sascha Sauer.

PPAR (gamma) plays an important role in the cell's fat and glucose metabolism.

The binding of the amorfrutin molecules activates various genes that reduce the plasma concentration of certain fatty acids and glucose. The reduced glucose level prevents the development of insulin resistance - the main cause of adult diabetes.

"Although there are already drugs on the market that affect the PPAR (gamma) receptor, they are not selective enough in their effect and cause side effects like weight gain and cardio-vascular problems," said Sascha Sauer.

In contrast, as demonstrated by the studies carried out to date, the amorfrutins are very well tolerated.

"However, drinking liquorice tea or eating liquorice will not help to treat diabetes," explained the scientist.

"The concentration of the substances in the tea and liquorice is far too low to be effective," Sauer added.

The researchers therefore developed special extraction processes to obtain the amorfrutins from the plant in sufficient concentrations. This could be used to produce amorfrutin extracts on an industrial scale.

The newly discovered active substances not only seem to hold great promise for the treatment of complex metabolic disorders, they may also be suitable for prophylactic use.