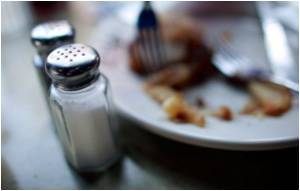 College student Galia Slayen, a former anorexia sufferer, has created a life-sized barbie and use it as a means to battle eating disorders. Life-sized barbie had shocking dimensions - 6 feet tall with a 39-inch bust, 18-inch waist and 33-inch hips.

Galia Slayen, who made the model, revealed that a real woman with the same dimensions would weigh just 110lb, giving her a BMI of 16.24 - a figure associated with eating disorders.

"If Barbie were an actual woman, she would be 5ft 9in tall, have a 39in bust, an 18in waist, 33in hips and a size 3 shoe. She likely would not menstruate... she'd have to walk on all fours due to her proportions," The Daily Mail quoted Slayen as telling the Huffington Post.


The giant Barbie, made from chicken wire and papier mache, is now on show at Hamilton College, Oregon, where Slayen is a student, as part of its National Eating Disorder Awareness Week (NEDAW).

Anorexia Nervosa - is it a psychological disorder , or simply an eating disorder gotten out of hand? And how does it differ from Bulimia Nervosa? Participate in our anorexia quiz to find out how well you understand this condition; learn its modern-day implications and how, in these mordern times, it affects both sexes equally .
Advertisement
<< Teenage Girls Value Character
Sachin Tendulkar Pays Homage to Sathya Sai Baba >>

Do you binge-eat secretly most of the time? Or do you feel so guilty after eating that you badly want to self-induce vomiting and get the food out. Check out if you are a victim of eating disorder.

Drug - Food Interactions Blood Pressure Calculator Indian Medical Journals Sanatogen Sinopril (2mg) (Lacidipine) Daily Calorie Requirements Noscaphene (Noscapine) The Essence of Yoga How to Reduce School Bag Weight - Simple Tips Find a Doctor
This site uses cookies to deliver our services. By using our site, you acknowledge that you have read and understand our Cookie Policy, Privacy Policy, and our Terms of Use