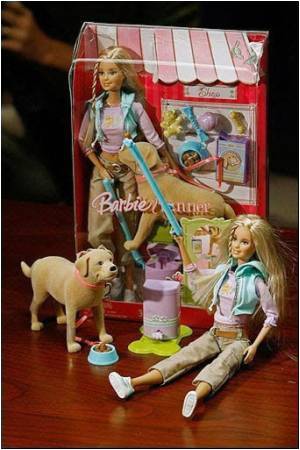 Barbie doll maker Mattel has been branded irresponsible after the recruitment drive for glamor models as young as 12. The latest racy fashion for the iconic doll has also come under fire, reports the Herald Sun.

A competition run by Mattel in tween magazine Dolly called on girls aged 12 to 16 to take part in a fashion shoot, complete with cosmetic makeover.

Experts have warned that the demand for latest gadgets and fashion-based entertainment by tech savy girls is steadily pushing dolls to their grave.
Advertisement

She said 12-year-old girls could not make an informed decision about participating in a modeling competition.

Barbie Doll Invasion Should Be Cut Down: Iran

Toy market onslaught of Barbie, Batman, Spiderman and Harry Potter should be wiped off says Iraninan prosecutor.
Advertisement
"They don't need to be paraded and put on show for some company's profits," Reist said.

"The Barbie brand teaches girls that makeup and fashion are what counts. This message limits them," she added.

Julie Gale, of Kids Free 2B Kids, said the competition prompted young girls to care too much about appearance.

"Girls' self-esteem fares better when they are not encouraged to focus on fashion, makeup and appearance," she said.

New Barbie With Hidden Camera Could be Misused by Pedophiles: Experts

Child protection experts have branded a new Barbie doll that features a hidden camera and costs 59.
Advertisement
<< Fat can be Fit
Young Alcohol Addicts in Australia >>

Mattel Recall Not Limited to Barbie Alone, but Extends to Other Toys too