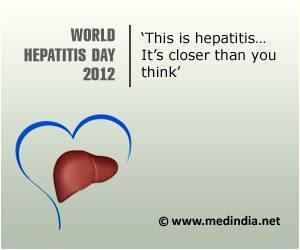 Among people infected with the hepatitis C virus (HCV), co-infection with HIV, speeds damage and scarring of liver tissue by almost a decade finds infectious disease experts at Johns Hopkins.

In a second study of HCV infection, the Johns Hopkins research team participated in the discovery of two genetic mutations that make it more likely that patients' immune systems can rid the body of HCV. Both studies are described in articles published online in February ahead of print in the journal Annals of Internal Medicine.

"Our latest study results suggest that HIV might promote aging and disease progression in people with HCV," says infectious disease specialist and senior investigator, David L. Thomas, M.D., M.P.H. Thomas, who is the Stanhope Bayne-Jones Professor and director of infectious diseases at the Johns Hopkins University School of Medicine and a professor at the university's Bloomberg School of Public Health, says that among 1,176 study participants, those co-infected with HCV and HIV showed the same severity of liver fibrosis and cirrhosis as those who were infected only with HCV but were 9.2 years older. All study participants were current and former intravenous drug users from Baltimore whose health and disease progression were being monitored with bi-monthly check-ups and liver tissue samples taken from 2006 to 2011.


The United States Centers for Disease Control and Prevention estimates that a quarter of the 3.2 million Americans chronically infected with HCV are also infected with HIV.
Advertisement
"There has been a growing hypothesis that HIV may accelerate the aging process, resulting in an earlier onset of chronic disease, including cancer, cardiovascular and liver disease. Until now, there have not been strong data to support this theory," says study lead investigator and infectious disease epidemiologist Gregory Kirk, M.D., Ph.D., M.P.H.

"There has been concern that increased chronic diseases in people aging with HIV may simply reflect their greater exposure to alcohol, tobacco or illicit drugs," adds Kirk, an associate professor at the Johns Hopkins Bloomberg School of Public Health. "Importantly, this investigation showed an increased severity of liver disease among people with HIV compared to people without HIV but whose pattern of smoking, alcohol drinking and illicit drug use was very similar."

"Co-infected patients may have to be monitored more closely for worsening liver disease, and may require earlier and more aggressive treatment than people without HIV infection," adds study co-investigator and epidemiologist Shruti Mehta, Ph.D., M.P.H. Although the reason for the accelerated rate of liver disease with HIV is unclear, the study results suggest that HIV and aging may share common mechanisms of immune activation that speed up HCV disease progression, says Mehta, an associate professor at the Bloomberg School of Public Health. Mehta and Kirk are both co-principal investigators of the long-term monitoring of the Baltimore group, known as the ALIVE cohort, which is short for the AIDS Linked to the IntraVenous Experience study.

The second study is believed to be the largest genetic investigation ever conducted of people infected with HCV. In it, researchers at 13 medical centers in five countries, including Thomas' Johns Hopkins team, analyzed nearly 800,000 differences in the genetic code among 919 people whose immune systems showed antibody evidence of having successfully fought off HCV infection, and another 1,482 people who became infected with the disease.

The international team's analysis showed that 15 percent of study participants who failed to become infected with HCV had either or both of two genetic variants, one near the gene for interleukin-28B and the other near the genes for HLA class II. Duggal, an assistant professor at the Bloomberg School of Public Health, says this information may help explain "with a relatively high degree of genetic certainty" why racial differences exist among those who do become infected. However, she cautions that further research is needed to determine the full impact of these genetic variants on preventing and treating HCV in people of different ethnicities.

Thomas says the findings may help physicians predict the people who are most likely to self-recover from exposure to HCV, and those who will most likely require aggressive treatment right away.

HCV infection is the nation's leading cause of liver failure, liver cancer and liver transplantation. The disease, transmitted by contact with blood and other bodily fluids of an infected person, and through sexual activity, injection drug use or sharing of personal care items, kills more than 10,000 Americans annually. An estimated 185 million people worldwide are infected with HCV.