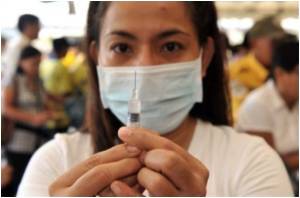 Judgement on whether to end the year-old swine flu pandemic alert may have to wait untill late August, when experts advising the WHO are scheduled to meet,the agency's chief said on Wednesday.

An emergency committee of 15 scientists headed by Australian infectious diseases expert John Mackenzie was meant to reassess by mid-July whether to recommend an end to the A(H1N1) pandemic.

But WHO chief Margaret Chan told AFP said the team had decided to wait a few more weeks in order to obtain more information about the development of the flu in the southern hemisphere's winter.

"The president of the committee said that we have to wait and see what is going on in Australia and New Zealand where, traditionally, the peak for influenza is in August.

Hong Kong researchers have discovered a new way to treat patients suffering from swine flu, a report said Thursday, after the deadly virus killed more than 18,000 people worldwide in the past year.
Advertisement
"So I expect the committee to meet at the end of July or in August," added the director-general of the WHO.

Following the committee's last meeting in June, Chan had decided to maintain a pandemic alert for swine flu, which according to WHO data has claimed some 18,311 lives worldwide.

Hospitals Asked to be on Alert for Swine Flu

Hospitals in Mumbai are being warned to be on a watchful lookout for swine flu symptoms after three people died in the city due to the H1N1 virus.
Advertisement
<< Accuracy of Leading Cholesterol Tests are Doubtful : Study
Sell Diabetes Drug Avandia With Restrictions: Experts Urge U... >>

WHO Probe to Examine Handling of Swine Flu Pandemic