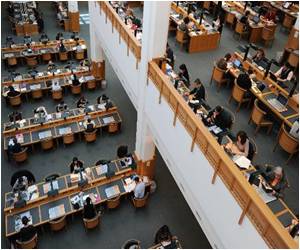 The British Library has thrown open the doors to its newsroom on Monday. Here, the public can access more than 300 years of newspaper history dating back to the English Civil War for free.

In the new centre at the national library in London, visitors can plough through 7.8 million scanned pages of historic newspapers and 4.8 million archived British Internet domain websites, totalling more than a billion individual web pages.

It also holds the British Library's collection of television and radio news broadcasts, which includes more than 40,000 programmes dating back to 2007 and is growing at a rate of 60 hours every day across 22 news outlets.


"Newspapers are often described as the 'first draft of history' -- in fact, in many cases they are the raw material of history and very often the only record that exists of an event or an individual that otherwise would have been forgotten," said the British Library's chief executive Roly Keating.
Advertisement
The new facility means researchers can access material within the library itself in central London, rather than trekking to the archive.

The vast cache of actual newspapers was sited at an outdated facility in suburban London, but has migrated to a new, high-tech storage unit in Yorkshire, northern England.

The newspaper collection dates back as far as the English Civil War (1642?1651) and constitutes "an unrivalled record of society, people, politics and events," the library says.

It contains more than 750 million pages of newspapers and periodicals from nearly every local, regional and national newspaper, and takes up more than 20 kilometres of shelves.

Keating said the collection was "a vital part of the memory of the nation -- recording every aspect of local, regional and national life", and was continuing to grow at a rate of more than seven metres every week.

"We're ensuring this vast, precious and incredibly fragile resource is available not just for today's researchers, but also future generations."

The new reading room, and the shift of the library's actual newspaper archives to a new facility, has been paid for with £33 million ($56 million, 40 million euro) of public funds.

The often fragile collection of 60 million printed newspapers has moved from Colindale in northwest London to a purpose-built new storage facility in the village of Boston Spa, between Leeds and York.

It is temperature and humidity-controlled so that the copies, mostly printed on cheap, low-grade paper meant to be read once and then thrown away, may stand a better chance of lasting well into the future.

The oxygen in the facility has been reduced from 21 percent to between 14 and 15 percent to reduce the risk of fire.

It is also off limits to people to help maintain the atmosphere. The papers are stored in 20-metre-high racks and are fetched by robotic cranes that deliver them, via an air-lock, to a retrieval area.

Source: AFP
Advertisement
<< Which is the World's Best Restaurant?
Progress Reported in Search for MERS Treatment >>

Washington Post the Most Tweeted Newspaper in 2013
The most content-driven tweets in the year 2013 were reportedly by the newspaper Washington Post...