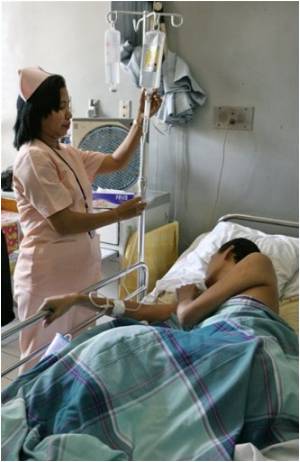 At a clinic in Jakarta an Indonesian woman exhales cigarette smoke into the mouth of a gaunt, naked patient, where smoking tobacco is openly touted as a cure for cancer.

The Western patient is suffering from emphysema, a condition she developed from decades of smoking. Along with cancer and autism, it's just one of the ailments the Griya Balur clinic claims it can cure with cigarettes.

"I missed this," says the woman, a regular customer, with an American accent, as Phil Collins's "I Can Feel It" blares in the background.


Griya Balur would be shut down in many parts of the world, but not in Indonesia, one of the developing-country new frontiers for big tobacco as it seeks to replace its dwindling profits in the health-conscious West.

Approximately half the smokers die due to smoking -related diseases. But it is not just the smokers who are at the receiving end. The passive smokers too, often pay a heavy price. If you still have not 'kicked the butt', learn more horrifying facts about smoking by participating in the following quiz.
Advertisement
Long traditions of tobacco use combined with poor regulation and the billions of dollars that flow into government coffers from the tobacco industry mean places like Griya Balur go unchallenged.

The "treatment" for the emphysema sufferer includes the blowing of smoke from "divine cigarettes" infused with "nanotechnology" to remove their cancer-causing "free radicals", through a tube into her diseased lungs.

Smoke is also blown into her ears and nose, while she holds a cup of aspirin over her right eye. The Phil Collins music, it seems, has no curative properties.

Griya Balur founder Dr. Gretha Zahar told AFP she had treated 60,000 people with tobacco smoke over the past decade.

With a PhD in nanochemistry from Padjadjaran University in Bandung, West Java, Zahar believes that by manipulating the mercury in tobacco smoking can cure all diseases including cancer, and even reverse the ageing process.

"Mercury is the cause of all illnesses. In my cigarettes -- we call them Divine Cigarettes -- there are scavengers that extract the mercury from the body," she said.

On her website she says she does not need to subject her theories to clinical tests or publish them in peer-reviewed journals, nor does she have the money to "fight" with "Western medical scientists".

Zahar's claims were recently presented to the Constitutional Court where farmers and legislators from the tobacco-growing hub of Central Java are challenging a law that recognises the leaf as addictive.

Aris Widodo, a pharmacology professor at Brawijaya University in Malang, East Java, told the court that he had never heard of anyone dying from smoking. On the contrary, he said, smoking was good for you.

"Smoking can eliminate anxiety, sharpen concentration and calm the nerves. It's a good cheap alternative to other expensive drugs, like Valium," he said.

Tobacco is addictive and harmful to health, but Indonesians are taking up the habit in ever larger -- and younger -- numbers, cheered on by the tobacco industry's aggressive marketing.

Addicts puff everywhere from beauty salons to dentist's waiting rooms. Parents give cigarettes to toddlers to keep them quiet. Cigarettes are handed out to teenagers along with concert tickets. Laws banning public smoking are rarely if ever enforced, and tobacco advertising is ubiquitous on the country's roadsides and television screens.

Cigarettes cost about one dollar for a pack of 20, yet they are often the second biggest item of household expenditure after food for the Southeast Asian country's poorest families.

According to the World Health Organisation, smoking rates have risen six-fold in Indonesia over the last 40 years. Smoking kills at least 400,000 people every year and another 25,000 die from passive smoking.

Yet Indonesia is the only country in Asia not to have ratified the WHO's Framework Convention on Tobacco Control, which sets policy recommendations and benchmarks for countries concerned about the health impacts of smoking.

The government reaps about seven billion dollars a year in excise taxes from the industry, which employs scores of thousands of people around Temanggung in Central Java.

Anti-smoking activists say industry players are dusting off their old marketing playbook to obscure the science and paint smoking as cool, masculine, glamorous and even healthy, especially to women and children.

During deliberations of smoking regulations in 2009, a clause stating tobacco's addictiveness went missing from the final draft. The government said the omission was a mere oversight and later reinserted the clause.

Health ministry official Budi Sampurno was questioned but he maintains that tobacco companies had nothing to do with it.

"Never. Is there any proof? We have never been approached by tobacco companies. That is not legal practice," he said.

Dr. Hakim Sorimuda Pohan, a Democratic Party legislator who helped draft the Health Law, said there was no doubt big tobacco was behind the shenanigans.

"They did the same thing in 1992. Tobacco companies successfully had the same clause omitted from the law," he said.

Every cigarette you smoke is causing irreversible damage to your body; slowly killing you from the inside. It also endangers those around you, your family and children.
Advertisement
Advertisement