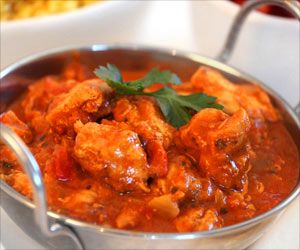 Indian takeaways often include a starter, such as an onion bhaji, a main course, such as a chicken korma or tikka masala, served alongside pulao rice and a naan bread. Health chiefs have warned that these standard Indian takeaway can contain enough food for two people.

Experts said, "Traditional Indian food is healthy, but a study of 280 takeaway samples from 36 outlets across the Republic of Ireland and Northern Ireland revealed that they contained far more than an adult's recommended daily calorie intake."

A survey carried out by a discount website in Britain reveals young people living in cities ordered an average of 25 takeaways every month.
Advertisement
‘Traditional Indian food is low in fat, high in fiber and rich in fruit and vegetables. However, a study warned that the standard Indian takeaway contained far more than an adult's recommended daily calorie intake. These takeaways can contain enough food for two people.’

Researchers at the University of Ulster found that the average portion of peshwari naan bread contained 748 calories, while an average dish of tikka masala main course harbored 1,249 calories. The starters which were tested contained one third of an adult's total daily amount of salt. Rice portions, meanwhile, were in general large enough for two people.


Cliodhna Foley-Nolan, director of human health and nutrition with the Safefood group, said, "While traditional meals in India are low in fat, high in fiber and rich in fruit and vegetables, chefs here have adapted their recipes to suit local taste buds favoring foods high in fat and salt and serving bigger portions."

Forty-seven-year old, Sue Cull of Griffith John Street, Swansea, was on her way home from a pub when she was bitten by a python.
Advertisement
<< Increased Nanoparticles Sea Traffic Raises Concern for Pulmo...
Girl With Epilepsy Inspires People to Support Legalization o... >>

Indian Takeaways Do Not Contain as Much Salt as Other Cuisines

While takeaways are tasty and add variety to our palate, a recent study has revealed that they may not be a healthy option after all.

Turn This Diwali into a Lighter Sweeter Celebration

More News on:
Low Calorie Diet Why Do We Eat - Nutrition Facts Diet Lifestyle and Heart Disease Lifestyle Modification: No Big Deal! How to Keep Christmas Calories under Control The Spark Solution Diet Turn This Diwali into a Lighter Sweeter Celebration