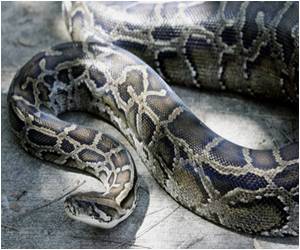 Forty-seven-year old, Sue Cull of Griffith John Street, Swansea, was on her way home from a pub when she was bitten by a python.

She was in an area which is many thousands of miles form the snake's natural habitat in the tropics.

A 35-year old man in northern Israel had to be rushed to a hospital after a snake bit him on his penis when he went to relieve himself in the toilet.
Advertisement

She was on her way to pick up a takeaway curry and needed to cross a patch of grass. At Morriston hospital, where she availed treatment, they had not quite seen any patient with a python bite and needed to take advice from a reptile and venom unit in London.


"Who would think you would get attacked by a python in Swansea? I would have been scared out of my life if I had seen it." After the attack, Sue began to shake uncontrollably and her face swelled up. She suffered bites on both her legs.

Nine Year Old Girl Getting Better After a Snake Bite

Tyler Butcher, all of nine years, was bitten by an 18-inch-long adder when she was enjoying a stroll with her family in the New Forest, Hampshire.
Advertisement
A spokesman for the Reptile Centre in Cardiff said: "It is possible she had an allergic reaction. Any snake may bite if it is frightened but the bite alone will not kill you."

Recounting the horror, Sue said, "It's just bizarre - when you are walking around you don't think there is going to be a python attacking you. If we had been told by police there was a snake on the loose I wouldn't have walked through the grass. I'm just lucky the snake didn't constrict me as well."

Four Vials of Antivenom Quite Unnecessary to Treat Snake Bites

Recent insight has pointed out that some doctors are using four times the amount of antivenom required to treat tiger snakebites.
Advertisement
<< Born as a Woman, Yet Identifies as a Man, Now in a Court Ba...
New Pathway That Triggers Septic Shock Identified >>