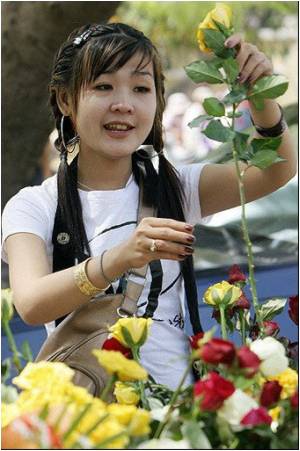 On college campuses "Hooking up" has become such a trend that some believe these casual, no-strings-attached sexual encounters may be replacing traditional romantic relationships.

However, a new study by researchers with The Miriam Hospital's Centers for Behavioral and Preventive Medicine suggests college students are not actually hooking up as frequently as one might think.

US experts have suggested that showing gratitude for the 'little things' in relationships can boost feelings of happiness and romance.
Advertisement

According to their study, published online by the Journal of Adolescent Health, romantic relationships are still the most common context for sexual behavior, at least among women in their first year of college. Researchers report romantic sex with a boyfriend or relationship partner was found to be twice as common as hookup sex in this particular group of students.


"Hooking up is one way that young adults explore intimate relationships, but it's not the most common way, and it is often exploratory," said Robyn L. Fielder, M.S., a research intern at The Miriam Hospital's Centers for Behavioral and Preventive Medicine. "So while hooking up gets more attention in the media, college students continue to develop romantic relationships, which are actually the most common context for sexual behavior."

What makes a relationship work such that it lasts a lifetime ?- A new book by American relationship therapists Charlie and Linda shows the way.
Advertisement
"Hooking up" is a loosely defined term characterized by sexual intimacy, ranging from kissing to sexual intercourse, between partners who are not dating or in a romantic relationship and do not expect commitment. However, Fielder says little is known about the frequency of sexual hookups, how this prevalence changes over time and whether hookups are replacing romantic relationships among college students in general.

Researchers surveyed 483 first-year female college students about their sexual behavior with hookup and romantic relationship partners during their freshmen year, as well as the summer after. They focused specifically on sexual behaviors, specifically oral or vaginal sex, that are most likely to have health consequences, such as sexually transmitted diseases (STDs) or pregnancy.

Before starting college, one-third of incoming freshmen women reported having at least one hookup, while nearly 60 percent said they had sex at least once in the context of a romantic relationship. Forty percent reported sexual hookups during the first year of college, and less than one in five participants had a sexual hookup each month. However, more than half - 56 percent - engaged in oral and/or vaginal sex with a boyfriend or romantic partner during the year.

The average number of sexual hookups per month ranged from one to three, suggesting that - for most women - hookups are experimental and relatively infrequent as opposed to a regular pattern of behavior. Specifically, the highest rate of sexual hookups took place at the beginning of the academic year (October) and the lowest rate was during the summer (June). Sexual hookups were also more common among Caucasian students than they were among Asian or African-American students.

"These findings support what we know about the first year of college: That it is a time when we see increases in sexual behavior and substance use, as young people explore who they want to be and how they want to interact with others - especially romantic partners," said Fielder. "It's important that we gain a better understanding of students' sexual behavior, since it can potentially affect both their physical and mental health as well as their academic success."

Fielder said the study's findings could guide university health promotion efforts, including the need for STD and pregnancy prevention, since many studies have shown that condom use among college students is inconsistent and, in fact, decreases over the first year of college.

Predict Your Success in Romantic Relationships

Both heart rate and skin conductance have been linked to a host of important outcomes in interpersonal relationships, including the likelihood of divorce.
Advertisement
<< Stem Cells + Nanofibers Results To A Promising Nerve Resear...
Ultrasound is Useful, Less Expensive In Evaluating Rheumato... >>