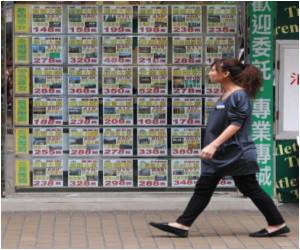 But some of the territory's poorest residents face losing their makeshift homes as the government seeks to dismantle them.
Advertisement

Perched on top of older buildings, the ramshackle dwellings may offer penthouse views in a city where space is at a premium, but the flimsy structures are frequently battered by typhoons and magnify oppressive summer heat.


The government says they are too unsafe -- and many of those who live in them agree.

But with luxury apartments selling for more than $50 million and a waiting list for public housing stretching for years, they say there is nowhere else for them to go.
Advertisement
"The rent is so high out there, how can we leave here? It costs at least several thousand (Hong Kong) dollars, we cannot afford it," said Su Xingyun, whose family of four lives in a tiny two-room rooftop hut which is under a government removal order.

Their chipboard and corrugated iron home is one among a dark warren of around 10 shacks on top of a 10-storey building in the working-class Sham Shui Po neighbourhood.

Su, 46, moved from mainland China to join her husband, who had lived on the rooftop for 20 years, but would like a better home for her young daughters.

She says she has been applying for public housing for several years.

"During a typhoon I'm really afraid. I'm worried that the roof will collapse because I can feel the walls shaking. It's not safe for a family."

"We don't have any privacy," added Su. A dank shared kitchen with a toilet and shower hose in one corner is where the family cook and wash.

Rooftop residents either own their homes or pay minimal rent to shady landlords. Upgrading to private accommodation can prove impossible, campaigners say.

"The deposit, commission and first month's rent for even a tiny sub-divided flat can be more than HK$10,000 (US$1,300)," said community worker Angela Lui of local campaign group the Society for Community Organisation (SoCO).

"It's a big number and families can't afford it.

Many rooftop homes were built in the 1950s, when there was an influx of immigrants from mainland China and few building restrictions. Now, it is an even mix of migrants and Hong Kongers who live there, says Lui. Some have done so for more than 30 years.

While there is no exact record of the number of rooftop residents, there are more than 170,000 substandard homes throughout the city, according to the authorities.

The government says its campaign against "unauthorised building works" (UBWs), which include rooftop homes, is in the interests of public safety. Between 2001 and 2011 the buildings department removed 400,000 UBWs.

But the pace of rooftop removals is now outstripping the ability to rehouse, says Lui, with a lack of coordination between the buildings and housing departments.

"It's a systemic problem."

Landlords and tenants of UBWs are not entitled to compensation from the government.

"No one told me this was illegal," said Su's neighbour Quang Xuan, 55, a refugee from Vietnam who works as a handyman and has lived in his rooftop home for 10 years.

"When people told me we had to move out I said to myself OK, I will go if I can find another place. But if I can't find somewhere I can afford, I risk becoming homeless, living under a flyover or in a park."

SoCO estimates that there are about 1,200 homeless people in Hong Kong.

Both the buildings and housing departments declined interview requests but said in statements that they worked closely together and that public rental housing would be offered to those who were eligible.

Eligibility criteria include means testing and living in the rooftop home for more than two years, prior to the removal order.

The buildings department said it would not, by law, make any resident homeless.

At the end of March this year there were almost 250,000 applications for public rental housing. The average waiting time for general applications is three years, the housing department said.

Those not eligible can go into temporary accommodation -- but Lui says that moving to the "transit centres" on the outskirts of Hong Kong means residents have to uproot their lives, their children, their jobs, which many do not want to do.

Residents of the Sham Shui Po rooftop have come to an agreement with the building's landlords -- who can also evict them -- that they can stay for up to three years, says Lui.

The buildings department removal notice, issued in 2012, does not give a timescale for eviction.

What is certain, though, is that the illegal homes will eventually be torn down.

In the short-term, rent subsidies would help residents move on to something better, says Lui.

But to solve the worsening housing crisis the government needs to build more affordable homes.

"Hong Kong now is a rich city with a high GDP," Lui said.

"We have the responsibility to ensure that everybody living here enjoys adequate housing."

Bird Flu Found in a Hongkong Poultry Farm
More than 80,000 chickens will be slaughtered in Hong Kong after bird flu was found on a poultry ......

Liquor Firms to Target Asian Drinkers
China's voracious appetite for wine has been slowing down, and now young middle class drinkers from ...

Gay Marriage at UK Mission Not Allowed by Hong Kong
UK officials have said that the Hong Kong government has refused to allow same-sex couples to marry ...