Gay Marriage at UK Mission Not Allowed by Hong Kong 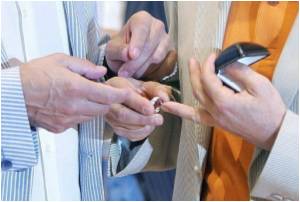 UK officials have said that the Hong Kong government has refused to allow same-sex couples to marry at the British consulate in the city.

This has prompted heavy criticism from gay and lesbian rights groups.

China's first Gay Pride event, organised by Shanghai's English-speaking expatriates, has been quietly celebrating homosexuality this week with no hint of a parade or advertising hype.
Advertisement

The British Foreign and Commonwealth Office announced last week that it would allow its overseas missions to perform same-sex marriages for Britons and their partners in countries where it is illegal under local laws.


However the service, which coincides with legislation to permit same-sex marriages taking effect in the UK, was contingent on local authorities granting their approval.

Ramping up the pressure on the Italian government to legalize civil unions for same-sex couples, thousands of people took part in the annual Gay Pride parade across the capital city of Rome.
Advertisement
Hong Kong's refusal to allow the marriages came despite countries often criticised for their gay rights records including China, Russia and Azerbaijian, as well as the deeply Catholic Philippines, giving their consent.

"Before the UK legislation that governs same-sex marriages was implemented earlier this month, we asked the Hong Kong Government for their agreement to perform such ceremonies here," a spokesperson for the British Consulate General said in statement emailed to AFP.

"Unfortunately, the Hong Kong government has raised an objection to the solemnisation of same sex marriages in Hong Kong," the statement said.

Nigel Collett, secretary for gay rights group Pink Alliance, accused the government of "denying any form of increase of rights" for homosexuals in the city.

"Hong Kong is making a fool of itself while Moscow and Beijing have taken a more sensible view for something that does not concern their citizens," he told AFP.

Representatives for the Hong Kong government were not immediately available to comment.

Same-sex marriages and civil partnerships are illegal in socially conservative Hong Kong, where homosexuality was only decriminalised in 1991.

In 2012, a local tycoon offered a $65 million "marriage bounty" to any man who could win the heart of his lesbian daughter.

Cecil Chao later increased the sum to $130 million but withdrew the offer earlier this year at the request of his daughter Gigi, who asked her father to treat her and her partner as a "normal, dignified human being".

More than 20 countries where same-sex marriage is not legal have agreed to allow their British consulates to perform the marriages, including Australia, Japan, Chile, Bolivia and Serbia.