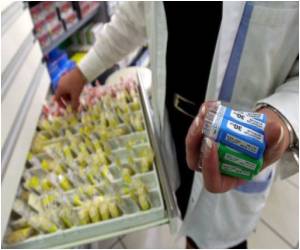 Homeopathy in India has grown to a large extent, from RM 1.5 billion to nearly RM 2.7 billion, according to statistics from the Associated Chambers of Commerce and Industry.

It is not just the fact that the size of the present domestic homeopathy market has been placed around Rs 2,758 crore, but that with a 30 per cent annual increase, it will reach Rs. 4,600 crore in a few years. These figures place India second to France in the ranking of the homeopathy market.

A new survey has revealed that more than a third of NHS hospitals in the country funded homeopathy treatments.
Advertisement

Other facts and figures make the role of homeopathy very impressive. With a hundred million people in the country totally committed to homeopathy, it is expected that the number will go over 16 crore in three years. Right now, there are five lakh registered homeopaths and every years there are 20,000 more being added. There are 185 homeopathic colleges in the country, and 11,000 homeopathic hospital beds.


According to D.S Rawat, the Secretary General in ASSOCHAM, people turn to allopathy only in emergency situations. But in chronic illnesses like skin and hair disease, respiratory problems, obesity, diabetes, homeopathy, although said to be slow, offers sure treatment.

The physician to Japanese Emperor Akihito and top scientists have slammed homeopathy as an absurd medicine, urging health workers to stay clear of the alternative treatment as it
Advertisement
The main factors that make homeopathy popular are the affordability of the treatment and the personalized interaction doctors have with their patients, which the World Health Organization also acknowledges.

Although countries like Britain continue to be critical of the approach, this 250-year old treatment regimen has become very popular, especially in India.

Blood Donation - Recipients Drug Interaction Checker Vent Forte (Theophylline) Sanatogen Blood Pressure Calculator Post-Nasal Drip Find a Hospital The Essence of Yoga Accident and Trauma Care Calculate Ideal Weight for Infants
This site uses cookies to deliver our services.By using our site, you acknowledge that you have read and understand our Cookie Policy, Privacy Policy, and our Terms of Use  Ok, Got it. Close
×