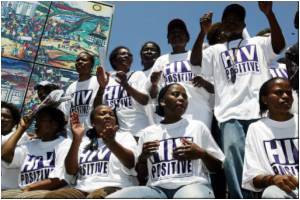 In the throes of labour, a Namibian woman was approached by a nurse who handed her a document to sign, saying the form would authorise a Caesarean section.

"I was in labour at the state hospital when a nurse showed me a paper and said I must sign to allow a Caesarean section," she told a court last week, speaking through an interpreter.

"I did not know this was also for sterilisation," said the woman, whose name is being protected by the court.


She only found out that she had been sterilised when she overheard two nurses discussing it in the hospital ward. Their reason was that she has HIV, which infects about 15 percent of Namibians between the ages of 15 and 49.
Advertisement
The dark courtroom fell silent as the 44-year-old woman recounted her horror at the discovery, following the birth of her seventh child five years ago.

She is among 16 women who are each suing the Namibian government for 1.2 million Namibian dollars (165,000 US dollars, 130,000 euros) for allegedly sterilising them without their consent because they are HIV-positive.

It is the first such case in Africa. Testimony is expected to conclude Friday.

More than 40 women have suffered a similar experience, with their cases recorded and presented to the health ministry in August 2008 by legal aid groups and a women's AIDS organisation.

The incidents happened at three state hospitals -- two in the capital Windhoek and one 700 kilometres (about 440 miles) north in Oshakati, the women say.

Court documents state that victims only found out that they could not bear children weeks after a Caesarean section.

The three women in court this week say the procedure violated their right to life, to privacy and to freedom from cruel, inhuman and degrading treatment.

"The law states that we should all be treated equally," said Veronica Kalambi of the Namibia Women's Health Network.

"That means that people living with HIV should have the same rights as everyone else -- including the right to found a family."

The Namibian government says it had conducted an investigation at state hospitals around the country and found that all the women had signed consent forms for sterilisation procedure.

"The investigation clearly established that all women who had had a Caesarean section as well as a sterilisation had signed the relevant consent forms before the operation was done," Health Minister Richard Kamwi told parliament before the trial.

Gynaecologist Matti Kimberg told the court that forms signed while the women were already in labour should not be considered valid.

"I would say (signing) a declaration to get sterilised while in labour is not correct," Kimberg said.

Priti Patel, AIDS programme manager at the Southern Africa Litigation Centre, who attended the court sessions in Windhoek last week says the victims' testimony in court showed they were now "very clear about what happened to them".

"The women were not aware of their right to say 'no' to sterilisation," Patel told AFP.

"This court case is also about informed consent, and how important it is for patients treated in public health systems to be fully informed about health options so they can make decisions."