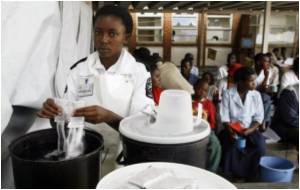 In the first study, a two-year program rewarded young girls in Malawi, rife with poverty and high HIV infection rates, with cash payments for regular school attendance. In Tanzania, the Bank paid young adults in cash to avoid unsafe sex.


The studies "show the potential for using cash payments to prevent people, especially women and girls, from engaging in unsafe sex while also ensuring that they stay in school and get the full benefit of an education," said David Wilson, who heads the Bank's global HIV/AIDS program.


In the education study in Malawi's Zomba district, which has both high HIV rates and school dropout rates among young girls, the World Bank found cash payments for at least 75 percent school attendance each month reduced infection rates by 60 percent, compared to an unpaid control group.

"Girls who received payments not only had less sex, but when they did, they tended to choose younger, safer partners," the World Bank said in a statement on the studies, which were released on the first day of the 18th International AIDS Conference in Vienna.

Cash transfers, the institution said, enabled a significant drop in what is called "transactional sex" among girls and young women who trade intercourse for assistance, gifts or money.

Schoolgirls who received payment appeared to avoid older, wealthier men who are much more likely to be HIV positive than schoolboys, according to the study.

"Programs like these could become an important missing part of effective HIV-prevention strategies," said Berk Ozler, a senior economist with the World Bank's Development Research Group, who conducted the study with researchers from George Washington University and the University of California.

Ozler said the findings suggest that "empowering girls financially can lead to reduced risk -- not just by reducing their sexual activity or practicing safer sex, but also by enabling them to choose partners who are less likely to be infected with HIV in the first place."

In Tanzania, meanwhile, a 12-month cash payment scheme for both young men and women to avoid unsafe sex and prevent a multitude of curable sexually transmitted infections (STIs) found a 25 percent drop compared to a control group.

"Existing prevention strategies have had limited success, so we have to look for creative new approaches to help people change their behavior and finally stop and then reverse the HIV/AIDS epidemic," said senior World Bank economist Damien de Walque, who carried out the study with researchers from the University of California and the Ifakara Health Institute in Tanzania.

To date, the World Bank has provided 4.5 billion dollars for HIV prevention, treatment, care and support programs in developing countries.