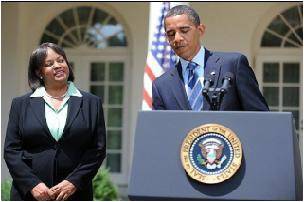 The findings come from Cancer Facts & Figures for African Americans 2011-2012, the latest edition of a report produced every two years by the American Cancer Society.

The higher overall cancer death rate among African Americans is due largely to higher mortality rates from breast and colorectal cancers in women and higher mortality rates from prostate, lung, and colorectal cancers in men. In recent years, death rates for lung and other smoking-related cancers and for prostate cancer have decreased faster in African American men than white men, leading to a narrowing of the gap in overall cancer death rates. Notably, lung cancer death rates for young African Americans and whites have converged in both men and women. In contrast, the racial disparity has continued to increase in recent years for colorectal cancer in both men and women and for breast cancer in women, cancers for which progress has been made through screening and improvements in treatment.

The American president-elect Barack Obama wants every American to have affordable healthcare options.
Advertisement
Highlights from the report include:

Lung cancer accounts for the largest number of cancer deaths among both men (29% of all cancer deaths) and women (22%), followed by prostate cancer in men (16%) and breast cancer in women (19%). For African American men and women, cancers of the colon and rectum and pancreas are expected to rank third and fourth, respectively, as the leading sites for cancer deaths.

The use of colorectal screening tests among African Americans has continued to increase over the last two decades, but remains lower than whites (49% having reported a recent test compared to 56% in whites).

About half (52%) of African American women aged 40 and older reported having a mammogram within the past year, slightly less than whites (54%).

According the National Health Interview Survey, in 2008 almost half of African American adults reported no leisure-time physical activity compared to about one in three whites.

African American boys and girls, among whom smoking rates have been decreasing since the late 1990s, have lower smoking rates than any other racial/ethnic group.