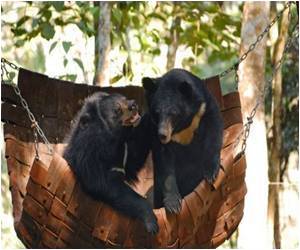 An amazing ability of black bears is the healing of their wounds while they hibernate, with close no scarring and infection reveals a new study.

Medical researchers and zoologists hope to eventually find out precisely how the bears' bodies heal while their body temperature, heart rate and metabolism are reduced.

Sleep is a barometer of good health in the elderly. Sleep problems in the elderly are controlled by various external and internal factors.
Advertisement

The findings are of especial relevance to medical researchers looking forward to improve slow-healing and infection-prone wounds in elderly, malnourished or diabetic patients.


This study was part of a project by scientists from the universities of Minnesota, Wyoming and the Minnesota Department of Natural Resources, who have tracked 1,000 black bears, in order to examine their health and behaviour, for 25 years.

Hyper means "excessive" and somnia refers to "sleep", so hypersomnia is excessively long or deep sleep despite sleeping for several hours at night.
Advertisement
Whilst tracking the bears - using radio collars - the researchers noticed some early evidence of their surprising healing abilities, the BBC reported.

"We identified a few animals each year with injuries resulting from gunshots or arrows from hunters; bite marks from other bears or predators," they wrote in their paper.

"These wounds were considered to have been incurred some time before the bears denned, and were often infected or inflamed... in early winter.

"Yet typically, when we revisited bears in their dens a few months later, most wounds had completely resolved whether or not we [cleaned them], sutured the areas or administered antibiotics."

To test the bear's healing abilities experimentally, the team cautiously tracked the healing of small cuts on the skin of 14 of their radio-collared bears in northern Minnesota.

Between November (when the bears first settled down in their dens) and March (nearly a month before they emerged) the wounds healed with "minimal evidence of scarring".

Besides, there were no signs of infection, the layers of damaged skin regrew and many of the bears even grew hair from newly formed follicles at the site of their injuries.

"It seems so surprising to us that their wounds would heal so well and so completely when they're hibernating and their metabolism is slowed down," Prof David Garshelis from the University of Minnesota said.

However, he asserted that the animals had many other "remarkable adaptations to hibernation".

"They sit in the den for six months and don't lose any appreciable muscle or bone mass, so I guess this healing is another adaptation," Prof Garshelis said.

During its winter hibernation, a black bear's core body temperature is reduced by as much as 7C (13F) and their heart rate decrease radically. In humans, a lowered body temperature, or conditions that hamper circulation can critically complicate wound-healing.

For this reason, the team hopes to discover the mechanism behind the bears' remarkable healing abilities.

This could be particularly be crucial for the development of treatments for slow-healing skin wounds in malnourished, hypothermic, diabetic and elderly patients.

The study has been published in the journal Integrative Zoology.

Perhaps, the above line can make you ponder if sleep has such benefits. Sleep, which is very essential for an individual's alertness and productivity
Advertisement
<< Metabolites Production Operated by Circadian Rhythms
Azad Laments India's Infant Mortality >>

Keloids
News Archive
News Resource
Advertisement
News Category
Milestone In Voluntary Blood Donation Achieved Samsung Reinvents Toilet for the Poor Which is a Better Form of Exercise: Daily or Weekly? First Phase of Foot-and-Mouth Disease Vaccination Shocking News: Polio Cases Return After a Decade in the US
More News
Sign up for Wellness Consult a Doctor Sign up for Selfcare