Here's Why We Fall Asleep When Bored 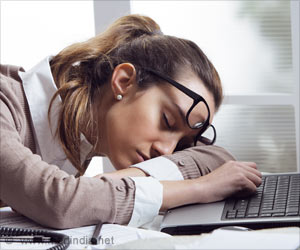 University of Tsukuba researcher discovers why we have the tendency to fall asleep in the absence of motivating stimuli, i.e., when bored.

Losing yourself in your favorite things without sleeping, or falling asleep during boring lectures. As humans, we often defy sleepiness and stay awake when attention is necessary, but also experience an inescapable desire to sleep in boring situations.

Advertisement
‘Adenosine has long been known to represent a state of relative energy deficiency and to induce sleep via adenosine receptors.’

The brain mechanisms governing the regulation of sleep by cognitive and emotional factors are not well understood.


A new paper published in the journal Nature Communications finds that a part of the brain that is associated with motivation and pleasure - the nucleus accumbens - also can produce sleep.
Advertisement
The new findings may explain why we have the tendency to fall asleep in the absence of motivating stimuli, i.e., when bored.

Researchers at the University of Tsukuba's International Institute for Integrative Sleep Medicine (WPI-IIIS) and Fudan University's Department of Pharmacology in the School of Basic Medical Sciences used chemo-genetic and optical techniques to remotely control the activities of nucleus accumbens neurons and the behaviors they mediate.

As a result, the Japanese-Chinese team discovered that nucleus accumbens neurons have an extremely strong ability to induce sleep that is indistinguishable from the major component of natural sleep, known as slow-wave sleep, as it is characterized by slow and high-voltage brain waves.

"The classic somnogen adenosine is a strong candidate for evoking the sleep effect in the nucleus accumbens," says Yo Oishi, the lead author on this project.

Caffeine, the most widely consumed psychostimulant in the world, produces its arousal effect also in the nucleus accumbens by blocking A2A receptors.

Compounds that activate A2A receptors in the nucleus accumbens may open safe therapeutic avenues for treating insomnia, which is one of the most common sleep problems with an estimated prevalence of 10-15 percent in the general population and 30-60 percent in the older population.