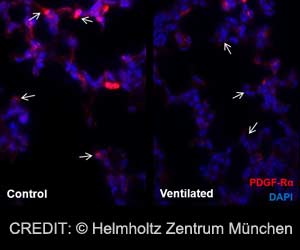 The lungs are one of the last organs to undergo full maturation in a baby's body. Children that are born very prematurely do not have fully developed lungs, and are therefore more susceptible to associated complications.

The most common of these is a chronic lung disease known as bronchopulmonary dysplasia (BPD), which mainly occurs when the (immature) newborns require mechanical ventilation or oxygen supplementation.

Advertisement
‘For the first time, the cells in premature baby's are linked to Bronchopulmonary dysplasia (BPD) and the decreased production of a key growth factor, namely PDGFR-α.’

The disease is characterized by a lack of fully developed alveoli and small blood vessels that support them. This leads to an increase in oxygen demand and makes breathing more difficult, effects which can be clinically measured.


"To date, there has been very little understanding of what exactly causes BPD," says Dr. Prajakta Oak, scientist at the Comprehensive Pneumology Center and Institute of Lung Biology and Disease (ILBD) at the Helmholtz Zentrum München.
Advertisement
"Alongside damage caused by mechanical ventilation and oxygen toxicity, characteristic inflammatory processes and the functional and structural immaturity of the lungs are considered to underlie the disease," the lead author of the current study explains.

The starting point for the research was a genetic association study involving a total of 1,061 neonates, 492 of whom had been diagnosed with BPD. It revealed that certain mutations in the gene for PDGFR-α (platelet-derived growth factor receptor alpha) significantly increased the risk of developing the disease.

That stands to reason, as the cells in the lung tissue that produce PDGFR-α are involved in the formation of the alveoli and in the development of lung structure.

The scientists were also able to confirm these genetic anomalies in cells isolated from the lungs of affected children and to link them to lowered production of this molecule and respective functional consequences.

"In a model system that has only been established at a few locations worldwide, we were then able to show that lowered production of PDGFR-α combined with mechanical ventilation led to the typical symptoms of BPD," explains research team leader Dr. Anne Hilgendorff from the ILBD.

"These included lower blood vessel density and defective septation in the lung as well as a higher rate of apoptosis."

The researchers associated these findings with a lower production in VEGF-A (vascular endothelial growth factor A), an important vascular growth factor. However, the researchers succeeded in decreasing the symptoms in the experimental model of the disease by artificially increasing signal transmission via PDGFR-α.

In further experiments, the researchers also demonstrated that the TGF-ß (transforming growth factor beta) signaling molecule plays a role in the development of BPD by decreasing production of PDGFR-α. The scientists presume that the messenger substance TGF-ß is released particularly frequently due to injury to the lung caused during mechanical ventilation.

"For the first time, we show in an experimental model and in cells of premature patients that there is a link between BPD and the decreased production of a key growth factor, namely PDGFR-α," Dr. Hilgendorff says, putting the results into context. BPD may be genetically determined, but it can also be caused or worsened by effects of the inflammatory process.

"Next we would like to examine even more closely whether we can target interventions into this signaling pathway and thus open up the way for potential therapies."