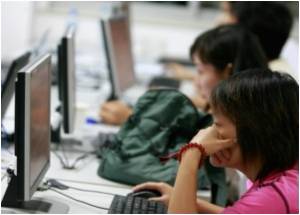 New study conducted by scientists finds heavy users of the Internet may exhibit signs of addiction.

The research tracked the Internet usage of 69 college students over two months.

Lead researcher Dr. Sriram Chellappan, an assistant professor of computer science at Missouri S and T, said that the findings provide significant new insights into the association between Internet use and addictive behavior.


At the beginning of the study, the 69 students completed a 20-question survey called the Internet-Related Problem Scale (IRPS).

The IRPS measures the level of problem a person is having due to Internet usage, on a scale of 0 to 200. This scale was developed to identify characteristics of addiction, such as introversion, withdrawal, craving, tolerance and negative life consequences.
Advertisement
The survey also captures escapism, ratings of loss of control, and reduced time on daily activities.

After agreeing to participate in the study, the students were assigned pseudonyms to prevent the researchers from linking specific students' identities with their Internet usage data.

Chellappan, Dr. P. Murali Doraiswamy, a professor of psychiatry and behavioral sciences at Duke University Medical Center, and their colleagues found that the range of IRPS scores among participating students over the two-month period ranged from 30 to 134 on the 200-point scale. The average score was 75.

Participants' total Internet usage ranged from 140 megabytes to 51 gigabytes, with an average of 7 gigabytes. The subjects' Internet usage was divided into several categories, including gaming, chatting, file downloading, email, browsing and social networking (Facebook and Twitter).

The total IRPS scores exhibited the highest correlations with gaming, chatting and browsing, and the lowest with email and social networking.